Peatlands are essential carbon sinks. But conservation efforts are threatened by the use of peat for gardening and horticulture. In 2020, 2.3 million cubic meters were used in the United Kingdom. The Wildlife Trusts propose to definitively ban this practice

They are among the most precious environments for their ability to accumulate and store the organic substance, without causing it to decompose, in conditions of water saturation and absence of oxygen. The plant material that is formed there, derived from the biological cycle of plants, gradually accumulates, together with the sediments of the lake basins that accompany them. Because of their rarity and their climatic peculiarities, peat bogs are protected areas on an international level.

Yet, if on the one hand the protection of the peat bog is universally recognized as a fundamental element in the fight against climate change, on the other hand it is still allowed today to be used for gardening and horticulture. Due to its richness in nutrients, peat is in fact used to enrich the target soil of the plants. One way to have a lasting fertilizing effect over time.

Carbon sequestration should address the tough balance between climate and biodiversity

The paradox was highlighted by The Wildlife Trusts, the British federation that brings together 46 charities for the conservation of nature, active throughout the national territory. “Investing in peat bog restoration and then allowing extraction to continue is illogical and represents an inefficient use of public funds,” comments Ailis Watt, bog manager at The Wildlife Trusts.

The request of the British environmental charities is therefore precise: to immediately ban all uses of peat for both hobby gardening and professional horticulture. The peremptory nature is due to the observation that over the years the use of peat for these purposes has grown and, despite good intentions, it has not been possible so far to stop the phenomenon. An inaction that has caused millions of tons of carbon emissions. “Up to now we have pursued the path of voluntary reduction in the use of peat”, the promoters recall. But this approach was patently useless.

The Wildlife Trusts are calling for an immediate end to peat sales.
Peatlands are essential for people and wildlife, but the use of peat compost continues to exploit these precious places. Support the call for an immediate ban on peat-based products! https://t.co/YwvIXBrd12 pic.twitter.com/Ypv3clxPmB

Growing peat use since the 1990s

Analysis by The Wildlife Trusts found that, despite an awareness campaign to halt the increase in extraction that started as early as the 1990s, gardeners and horticultural companies have used around 81 million cubic meters of peat since 1990. “This led to the release of between 14 and 31 million tons of carbon dioxide. Gases that would have remained locked up if the peat bogs had been kept intact and in good health”.

The objectives of voluntary reduction of the use of peat have been largely missed. The use, even for hobby purposes, continues. Voluntary goals to reduce peat use, with the goal set in 2011 to end its use by amateur gardeners by 2020, have largely been missed. 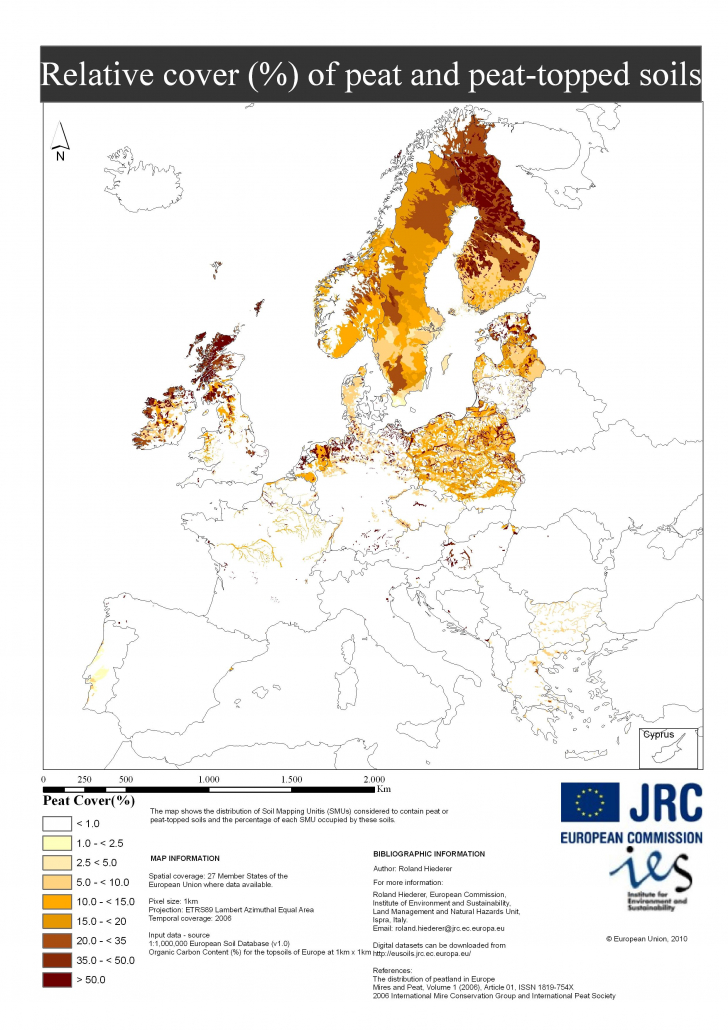 The distribution of peatlands in Europe. SOURCE: JRC European Commission.

In 2020, for example, the UK used around 2.3 million cubic meters of peat. 900 thousand of these were extracted from national soils (especially the soils of northern Scotland are particularly rich. The other 1.4 million were imported from Ireland and the rest of Europe. “In doing so – the analysts of The Wildlife point out Trusts – the environmental damage of peat use in the UK is effectively outsourced”.

The peat extracted for horticulture in 2020 alone is responsible for the release of 880 thousand tons of carbon dioxide. An amount equivalent to that caused by a thousand cars that travel more than 87 times around the Earth at the equator.

The British government assumes a stop to 2024

The UK government is currently considering a ban for hobby activities. But the stop would only start in 2024. A risk, according to The Wildlife Trusts. Waiting another 18 months could add another 1.5 million tons of CO2 to the atmosphere. More or less the equivalent of the annual greenhouse gas emissions of over 214,000 British residents.

“Whenever governments hesitate to ban the use of peat in horticulture, we risk losing more of this habitat that has taken millennia to develop, as well as losing its enormous carbon storage capacity,” comments Watt. “Its extraction is harmful to our climate and to wildlife, such as migratory birds and reptiles. The United Kingdom is already one of the poorest countries in the world in nature and the extraction of peat destroys complex ecosystems which are vital for the recovery of nature ”.