This is a battle that is being fought under the radar, but our health, the health of ecosystems, agricultural systems and the economy depend on it. We have identified 5 issues that need to be addressed, at all levels, to restore soil health

“Let’s get 75% of Europe’s soils back to good health by 2030”. This aim is so important to the European Union that the Von der Leyen Commission has included it among the five missions of the Horizon Europe programme. Experts all over the world are well aware of why the EU executive is so concerned. Perhaps less so is public opinion.

A few figures may give some idea of the situation: 33% of the world’s soils are degraded. The percentage in Europe rises to 60%, and here, in just 10 years, 177,000 square kilometres of land have suffered from progressive desertification (an area more than half the size of Italy). On the level of the planet, cultivated soils have lost between 25 and 75% of their carbon content. This is released into the atmosphere in the form of CO 2, contributing to the rise in global temperatures.

An unforgiving and certainly worrying picture, because unhealthy soils mean damage to crop yields amounting to 400 billion dollars a year, the progressive loss of biodiversity, and greater exposure to flooding and erosion. It is no coincidence that the FAO also took action and created World Soil Day in 2014, which will be celebrated again on December 5th this year.
But what are soil’s “enemies”? The list is very long. We have selected five that give a good idea of the danger the world is in. Humanity is responsible for almost all of them.

Anyone who thinks that the deforestation problem can be put on the back burner while the world deals with the Covid-19 pandemic is wrong. There is a direct link between progressive reduction of the world’s natural habitats and forests and the increase in viruses that jump species, transmitting from wild animals to humans. Our health depends on the health of the ecosystem. The health of forests is a crucial factor here.

The situation is certainly not positive: since 1990, according to the latest FAO report on the State of the Forests, 420 million hectares have been lost due to land being converted to other uses (agriculture, not only for food but also for energy, or to make room for intensive livestock farming).
The only bit of good news is that the rate of deforestation has fallen over the last 30 years. Even now, however, around 10 million hectares are still lost every year due to human activity (an area larger than Austria). 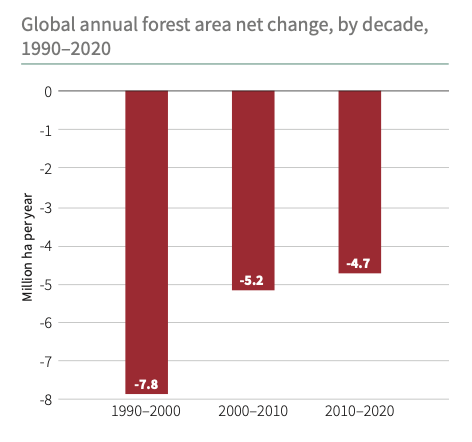 Deforestation has a direct impact on soil fertility (and thus on agricultural yields) and its ability to sequester carbon. It thus becomes a crucial driver of global warming and climate change. The fact that 68% of land mammals and 75% of birds live in forests shows that the risk of viruses spreading increases as trees are felled. Sustainable forest management and strict protection of primary forests are therefore the only way to hope to reverse the trend.

2. Plastics on fields, only 28% are recycled

The use of plastics has always been in the spotlight because of the implicit risks it poses in terms of environmental impact. Much attention has been paid in recent years to the problem of plastic waste entering rivers, seas and oceans. But the issue also arises in the agricultural sector. Research published in the scientific journal Agriculture and Agricultural Science Procedia noted as early as 2016 that “While generating a significant increase in productivity, the increasing use of plastics in agriculture is also generating increasingly adverse effects on the agricultural-ecosystem environment”. According to the Agriculture Plastics Environment trade association, in 2014 the Old Continent produced more than 1.3 million metric tons of agricultural plastic waste. Of this, only 28% was recycled.

The global Biodegradable Mulch Films market is forecast to reach USD 91.96 Million by 2027, according to a new report by Reports and Data.

One emblematic example is the use of mulch films, usually made of polyethylene, polypropylene or polyester, on fields. These are laid on the ground to reduce the presence of weeds, conserve humidity and ensure that an ideal microclimate is maintained. The massive use of these sheets obviously leads to a disposal problem. It is estimated that every year, the amount of no-longer-usable mulch films in Europe alone is around 15,000 metric tons.
These films are also notoriously difficult to recycle and tend to produce low-quality recovered material. One exception is biodegradable films, whose usefulness was officially recognised by the European Parliament in October 2017.

3. 80% of natural habitats lost to concrete

A study published in the scientific journal Nature in January 2020 noted that urban areas are still home to more than half the world’s population and are experiencing faster growth than the latter. As if that were not enough, “urban areas contribute 70 per cent of global man-made greenhouse gas emissions, and their expansion has led to more than 80 per cent of the loss of natural habitats in local areas”. The trend looks set to continue until at least 2040, and it is estimated that no less than 50% of newly expanded urban land will be on currently cultivated land. According to the study, this will lead to a decrease in global agricultural production of between 1% and 4%.

The problem affects Italy too. According to the latest edition of the Soil Consumption Report by the National Environmental Protection System (SNPA), “in the last year, new artificial coverings have covered an additional 57.5 km 2, or, on average, about 16 hectares per day. An increase that, unfortunately, shows no signs of slowing down. In all, including new soil that has been permanently used up, the sealing-off of soil has increased by 22.1 km 2 . 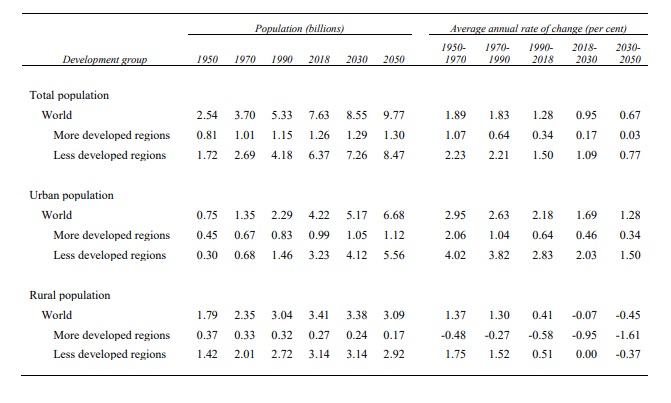 Urban areas are still home to more than half of the world’s population and are experiencing faster growth than the latter. SOURCE: United Nations, Department of Economic and Social Affairs, Population Division (2019). World Urbanization Prospects: The 2018 Revision (ST/ESA/SER.A/420). New York: United Nations. Copyright © 2019 by United Nations, made available under a Creative Commons license CC BY 3.0: http://creativecommons.org/licenses/by/3.0/igo/

This alarm has been echoed internationally: in 2013 the European Parliament and the European Council set important targets such as zero net soil consumption by 2050 (i.e. ‘establishing the balance’ between soil consumption and the increase in restored agricultural, natural and semi- natural areas) and recognising soil as an essential natural capital resource by 2020. Measures to protect soil and restore degraded land are also part of the European Green Deal agenda.

Worldwide, the United Nations took action in 2015, setting two decisive targets for 2030: bringing consumption into line with real population growth and a balance of land degradation that is not negative (the same principle as above, applied to the issue of reducing or recovering soil’s biological or economic productivity). For Italy, the SNPA itself has proposed that a national law should be introduced to ensure a “zero balance for soil consumption”.

Of all the issues relating to the environmental impact of human activities, climate change is probably the one to attract the most attention. The adverse effects of global warming are also being felt on the ground, starting with the increasingly worrying loss of biodiversity. But that is not all. In its latest report, the UN’s Intergovernmental Panel on Climate Change (IPCC) highlighted several critical points in particular. First of all, climate change has had an adverse impact on food security and terrestrial ecosystems, and has promoted desertification and soil degradation in many regions.

The list of collateral consequences includes ‘increased frequency, intensity and duration of heat-related events’, as evidenced, for example, by the increasing prevalence of droughts in the Mediterranean area, western and north-eastern Asia, many parts of South America and much of Africa. At the same time, many other phenomena, such as increased rainfall and wind strength, thawing and rising sea levels, are promoting degradation of the land. The study also says “climate change has already affected food security because of warming, changing precipitation patterns and the increased frequency of some extreme events”.

5. Agricultural practices, choosing the right ones is crucial

The use of good agricultural practices is a central strategy for achieving the goals set by the European Commission of ensuring the health of at least three quarters of the continent’s soil by 2030. Furthermore, agriculture itself has long been affected by the adverse effects of climate change. In some areas of the continent, higher temperatures can accelerate the process of decomposition in stable peatlands, releasing CO 2 into the atmosphere, already noted in an analysis by the European Environment Agency (EEA) in 2015. This could become much more obvious “in the far north of Europe and Russia”, where melting permafrost can release large amounts of methane, a greenhouse gas much more potent than carbon dioxide.

There is however no shortage of opportunities to counteract this. Growth in emissions, for example, can be offset by organic farming which, through the use of inputs such as manure, is able to rebuild organic carbon at depth and reduce greenhouse gases through not using chemical fertilisers. According to EEA estimates, “CO 2 emissions per hectare from organic farming systems are 48 to 66% lower than from conventional systems”.

The ability of agricultural soils to store carbon while mitigating climate change has also long been the subject of research. This activity, referred to as the Carbon sink or Biospheric Sink, is a property of soils that can be nurtured through the use of sustainable practices. One of many examples is the production and use of biochar, the organic matter resulting from the thermochemical conversion of biomass. This material has enormous potential in terms of CO 2 capture, estimated to remove over a billion metric tons each year.