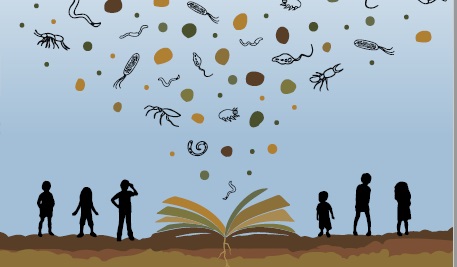 A little bit of fairy tale, a little bit of a comics. With a digression into a peculiar bildungsroman. Soil biodiversity becomes the leading character of ten stories for the youngest thanks to a FAO project

“Keep soil alive, protect soil biodiversity.” That’ s the motto behind the children’s book competition launched by FAO as part of World Soil Day last December. The initiative, which also involved the International Union of Soil Sciences (IUSS) and the Global Soil Partnership (GSP), aims to give “visibility to the importance of soil organisms and raised awareness on the urgency of protecting soil biodiversity.” The project results in a selection of 10 stories designed for a very young audience – 6 to 11 years old – from a total of 80 books from over 60 countries.

Soil is home to 1/4 of the Planet’s biodiversity

The message is clear: there is a priceless treasure in the soil and we need to act now to protect it. Soils host 25% of the world’s biodiversity, FAO says, “and they are responsible for providing the ecosystem services essential to sustaining life on earth”. The issue, on which the organization has been focusing since Soil Day premiered in 2014, has been addressed with 780 events coordinated in over a hundred countries. The information campaign on biodiversity, says the UN agency, succeeded in reaching an estimated 800 million people so far.

Ten stories, indeed, let kids discover the soil and its inhabitants. Did you know, ask the Australian author Sharada Keats and her Canadian colleague JiaJia Hamner, that the largest living organism on the planet is none other than “the largest organism is a humongous honey fungus, whose root-like rhizomorphs and branching mycelia cover close to nine square kilometres of soil in an Oregon forest, in the United States of America”? From big to small is a short step back. Biodiversity is manifold and it couldn’t be otherwise: what kind of soil could exist without microbes? Yep. 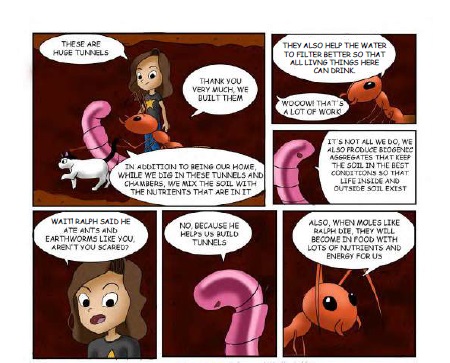 More episodes follow one after another: the benefits of soil, the dangers posed by the use of chemical fertilizers, and deforestation. And then there is an ant who invites us to consider his legitimate concerns while a skeptical young pig puts aside his initial reluctance and learns to love the soil and raze it without fear. Here is the bildungsroman-shaped graphic novel, here’s the literary trick showing the ecosystem’s complexity. Not bad, right? 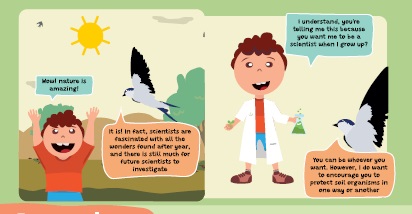 We can all do something

Ok, we’ve probably got too far. However we must remember that the issue is extremely serious. The threats are well-known and soil care is up to all of us. Pedro Mondaca, Chilean agronomist and founder of Agro Conciencia, an organization for the promotion of sustainable development, is fully aware of this. Just like young Kuri, his literary alter ego. “Do you want me to be a scientist when I grow up?” he asks to the swallow Lupi, who has travelled a long way to raise his awareness. “You can be whatever you want,” the bird replies, “However, I do want to encourage you to protect soil organisms in one way or another.” They all lived happily ever after. Even the fungi, even the microbes. Even the most secret players of this never-ending ecosystem’s dance.