Pixabay License Free for commercial use Attribution not required

Unsustainable land management is harming common birds in agricultural areas, according to Czech ornithologist Petr Voříšek. Their biodiversity index has plummeted in the last 40 years

The flight of birds has always fascinated observers, who captured by their aggregation shapes and the huge variety of species. But ornithology is far more than just a hobby, as experts – called to evaluate, describe and classify birds’ characteristics – may confirm. Soil scientists are equally familiar with the idea since birds’ dynamics are also a notorious source of useful information on the surrounding ecosystem. Including trends, problems and possible solutions.

The concept has been expressed by Petr Voříšek, a member of the Czech Society for Ornithology in Prague, in an interview published by the European Environment Agency. The scientist, who is coordinator of the second European Breeding Bird Atlas, believes that observation, data collection and ecosystem analysis are closely linked. With clear implications.

“Information about bird distribution and abundance helps decision-makers to prioritise management and conservation actions”, he says. “Changes in abundance and distribution of groups of species, such as farmland birds, provide signals about the health of a particular habitat type or the impact of a large-scale phenomenon like climate change”.

Unfortunately, current informations outline a worrying picture. “Intensive land use is leaving less resource for birds — this is the main human pressure,” says Voříšek. “This is particularly evident for farmland and birds using this type of habitat. Intensive agricultural practices, including excessive use of pesticides and fertilisers, heavy machinery or removal of fallow land, makes modern farmland less and less suitable for birds and other wildlife.”

And here’s the connection. As the protection of endangered species is a crucial goal, in fact, pursuing sustainable agricultural practices is part of a broader agenda. Expecially in Europe where Green Deal has been launched and agriculture is still responsible for about 10 percent of total greenhouse gas emissions.

New website for Pan-European Common Bird Monitoring #PECBMS is online at https://t.co/Ad5fimtiQV Find out about surveys in 28 countries and what they tell us about trends in European birds #ornithology #conservation pic.twitter.com/KbQBmN7fzl

The impact of intensive practices on rural birds, on the other hand, is a detector of soil’s health. That’s why we should probably take a look at the so called Farmland birds index, an indicator used in the assessment of European agricultural areas.

The idea is that by being at the top of the food chain, birds can also be good indicators for the general state of biodiversity. 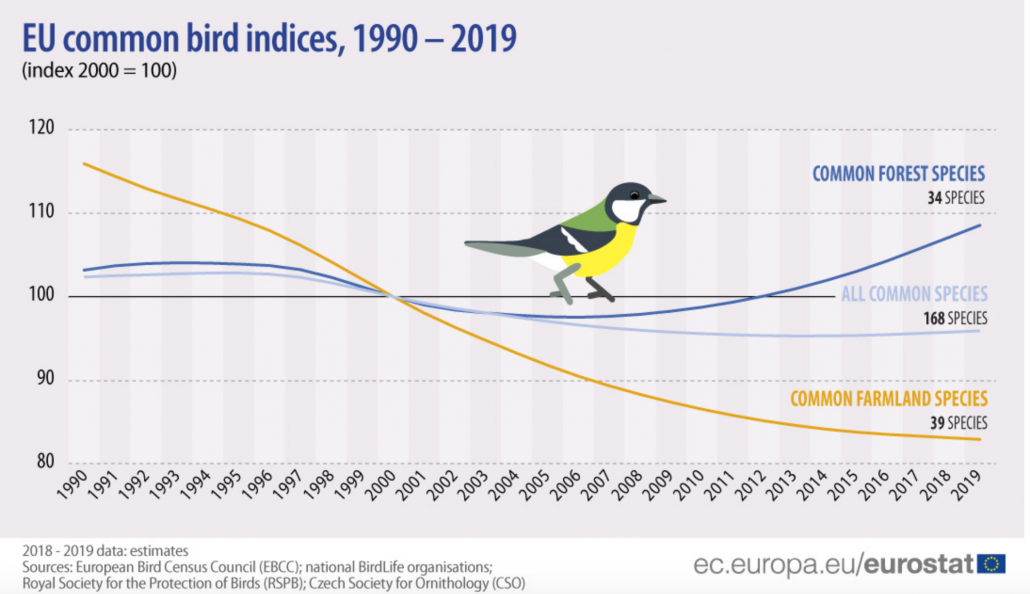 Expressed as a percentage – setting the starting point at 100 for the year in which surveys began – this index, their authors say, “measures the rate of change in the relative abundance of common bird species at selected sites.” According to the latest available data, Voříšek say, “The farmland bird index in Europe declined by 57 % between 1980 and 2018 and the distribution range of the farmland birds as a group shrunk in the last 30 years in Europe.”

Moreover, at the regional level, “we also see a negative effect of intensive forestry, land abandonment or intensive use of inland wetlands.” The damage to biodiversity, in short, is clear. One more reason to promote sustainable agriculture to protect the ecosystem.