CC0 Public Domain. Free for commercial use. No attribution required

The European Circular Bioeconomy Policy Initiative manifesto, signed by European universities, research centers and companies, has been released. Its five-point strategy is designed to support the future of the European economy. Soil regeneration and bioeconomy development are the main themes

European green transition cannot be achieved without implementing circular bioeconomy which essential to guarantee a better use of resources. Unfortunately this approach has not been fully implemented yet. That’ s the key message emerged during the launch event of the European Circular Bioeconomy Policy Initiative (ECBPI). “Time is running out, we need to regenerate our soil but we are still far from the goals” says David Newman, managing director of ECBPI. Biogenic material, he argues, is an essential resource for soil health, but we are able to intercept only 2% of its total amount. In other words, it seems we to need to accelerate this process more than ever.

Recycling is a crucial issue. But circular bioeconomy as a whole is still a more sophisticated matter according to the ECBPI Manifesto, which has already been endorsed by 26 entities including universities, research centers and firms. Here are its five key points:

With the implementation of the Soil Strategy “Healthy Soil for Healthy Life” to the “Farm to Fork Strategy” and the new Regulation on the integration of land use, land use change and forestry (LULUCF), the 2021-22 period could be a turning point. “We have the opportunity to achieve the circular bioeconomy goals,” says Roberto Ferrigno, board member of the Institute for European Environmental Policy. Acting on the energy side in order to cut CO2 emissions into the atmosphere is essential but cannot be enough. If we want to reach climate targets, we must focus on soil carbon sequestration. “That’s why we have to concentrate on soil and stop deforestation” Mr Ferrigno says. “We also have to review the EU Directive on pesticides“, replacing the existing chemical based ones with natural products. 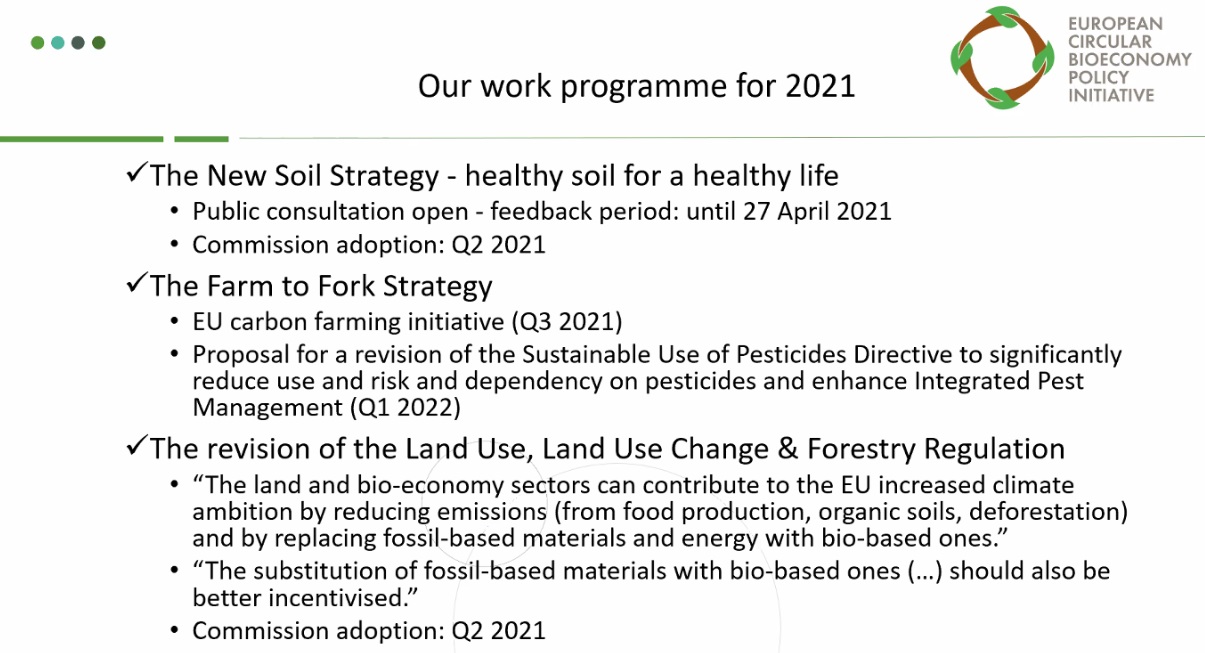 The essential link between soil and bio-waste

At the center of these initiatives is the reuse of bio-waste. It’s an issue ” that needs to be developed at local level”, says Florian Amlinger, director of the Austrian firm Compost – Consulting & Development, pointing out the role of community participation and the importance of each territory’s peculiarities. But the issue is also a sign of a new paradigm.

“For years we looked at bio-waste in terms of a disposal problem, today we see it as a resource,” suggests Percy Foster, director of Irish consulting firm Foster Environmental. Returning bio-waste to the soil in a circular perspective in fact means contributing to its health and performance (in terms of fertility and carbon capture rates). But the process, which is the basic step for compost production, is not self-evident. First of all, “it would be necessary to set specific recycling targets (as a percentage of total waste, ed.) such as those that already exist for plastic waste,” says Foster. In addition, we need to avoid contamination , a widespread phenomenon which often undermines the efforts to valorise waste materials.

Soil role is therefore essential. “If we look at bioeconomy as a building, then the soil can be seen as its foundation,” explains Alessio Boldrin, associate professor at Technical University of Denmark. In this sense, the market may become a benchmark. “Every time we develop new technologies and solutions, we have to adopt a business plan,” says Sergio Ponsá Salas, director of the BETA Tech Center at the Universitat de Vic – Universitat Central de Catalunya. In other words, “we have to ask ourselves if these technologies can have a place in the market and if they are compliant with the existing policies and regulations”.

…and helps the economic system

And what about economic risk? Is it possible that restrictions imposed by the green transition will have a negative impact on economic growth? In short term, countries that are highly dependent on fossil fuels could suffer the effects of this change and that’ s why the European Union has already allocated €150 billion through the Just Transition Mechanism that will be in place until 2027. In any case, opportunities are clearly evident. “37% of EU Recovery plan resources are climate-related ,” says Roberta De Santis, professor of Economic Policy at LUISS in Rome. While bioeconomy, according to 2018 European Commission estimates, could generate one million new jobs by 2030.