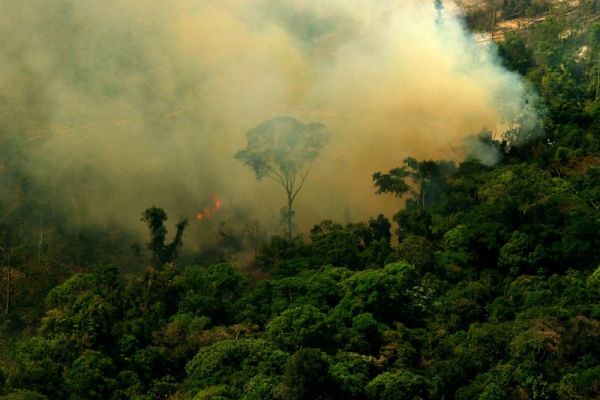 In the Brazilian Amazon, deforestation is accelerating faster than ever. Climate risks and economic damage are here to stay. While government’s response is still controversial

In Brazilian Amazon deforestation increased 67% in May 2021 from the same month last year, according to Brazil’s national space research institute Inpe quoted by Reuters. Worrying numbers, of course, which are likely to result in further accusations to president Jair Bolsonaro. Mr Bolsonaro, in fact, has been criticized for not pursuing any green friendly policy while even encouraging land grabbing. In April, deforestation had increased 43%, the highest monthly growth in five years.

Deforestation is a long-term trend. Fueled by the agribusiness expansion, the NGO Global Witness said, the destruction of Brazilian Amazon has led to the disappearance of more than 20 million hectares of tropical forest between 2002 and 2018, an area almost as large as the UK. Last months’ trend is even more scary. In 2021, according to Reuters, forest disappearence has grown 25%. In the first five months of the year, Brazil has lost a 2,548 square kilometers area or three times the size of New York City.

SOS climate change. And even agribusiness is gonna pay for that

The implications are clear, especially for climate. In the southern Amazon, for example, a study carried out by the Terrestrial Ecosystem Dynamics Laboratory of the University of Helsinki has claimed that large-scale agriculture causes “a higher increase in surface temperature” when compared to smallholder farming activities. In addition, large-scale deforestation “leads to a more prominent reduction in rainfall volumes” thus encouraging climate change. And that’s just a part of the story.

A recent study published in Nature Communications, in fact, also showed how deforestation ultimately impacts the agribusiness sector itself. That means that even the main responsible for the problem is expected to pay a price for it. The investigation coordinated by scientists from the Centre for Remote Sensing at the Federal University of Minas Gerais, estimates that the decrease in rainfall for the 2015-2050 period will probably result in a significant productivity loss for operators, thus creating, for example, a $5.6 billion damage for soybean farmers. In the cattle sector, losses are expected to exceed $180 billion.

Political response is not convincing

Finally, the controversial political response of the Brazilian government is also a matter of concern. In recent months, Brazilian Environment Minister Ricardo Salles suggested a 30%-40% reduction in deforestation could be possible within a year. This assumption, however, is based on the availability of significant economic aid by United States and Norway. In response to President Bolsonaro’s disputed policies, in 2019 Norwegian government suspended its funding to the Amazon Protection Fund promoted by Brazil.

In April, according to the Reuters, Bolsonaro had promised to double the funds for the safeguard of Brazil natural resources . The day after he signed a controversial federal budget which included a cut in environmental spending.