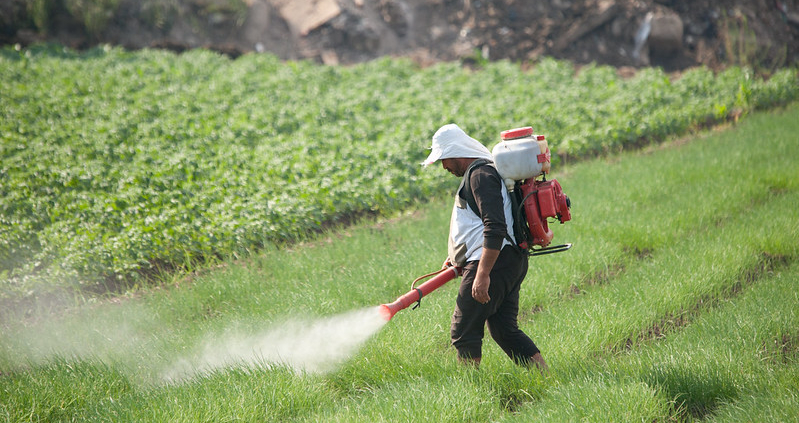 British authorities have banned several hazardous pesticides. However, a loophole allows companies to sell them abroad, a Greenpeace report has revealed. The list features weedkillers, fungicides and insecticides. Including a neonicotinoid causing large-scale adverse effects on bees.

In 2020 the UK sold abroad 12,240 tons of pesticides still banned within its borders as they were deemed dangerous to health according to a joint investigation by Unearthed, the team of investigative journalists of Greenpeace, and the German NGO Public Eye. “Unearthed and Public Eye found that UK companies shipped products containing seven different banned agrochemicals and applied for permissions to export a further six – a much wider range of banned pesticides being exported from this country than previously seen,” says a statement.

The findings identify “a much wider range of banned pesticides being exported than previously seen”. And they have been confirmed by the Health and Safety Executive (HSE), the body which regulates UK exports of prohibited chemicals.

Breaking: A new @UE and @publiceye_ch investigation has uncovered shipments of thousands of tonnes of banned pesticides out of the UK in 2020

The British government has refused to follow Europe's lead and commit to ending these exportshttps://t.co/u3lPaGUwTI

Seven pesticides (plus 6 others) in the spotlight

The list of products includes herbicides Paraquat, Diquat and Asulam, insecticides Imidacloprid and Cyhalothrin, and fungicides Chlorothalonil and Propiconazole. Paraquat, in particular, “is one of the most acutely toxic herbicides in the world. It has caused tens of thousands of poisoning deaths worldwide, and has been found by scientists to increase the risk of Parkinson’s disease through low-level chronic exposure.”

Propiconazole, which has been banned in the UK in 2019, is also a major concern. As it was classified as a “toxic to reproduction” since it’s capable of harming babies in the womb.

The list of pesticides for which companies have applied for foreign trade permits but have not been shipped in 2020 includes products based on 1,3-dichloropropene, Desmedipham, Propanil, Chlorpropham, Dichlobenil and Iprodione.

A dangerous affair for bees

Imidacloprid, a product which is still regularly exported despite a ban on domestic use imposed by the British authorities in 2018, is also under fire. The substance falls into the broader category of neonicotinoids, which have been deemed highly dangerous to bees. According to a recent study by the University of Koblenz and Landau, in fact, the toxicity of 381 pesticides to bees, other pollinating insects and aquatic invertebrates has more than doubled over the past 25 years. With some seriously consequences.

“Three out of four crops across the globe producing fruits or seeds for human use as food depend, at least in part, on pollinators”, according to FAO. However, “The diversity of bees and other pollinators worldwide is falling. This concerning trend is caused by a number of factors, including widespread use of unsustainable farming practices, mono-cropping, excessive use of agricultural chemicals, and the effects of climate change and climate variability.”

FAO: we must invest in sustainable agriculture (Or we won’t be able to feed the world)

Pesticides banned in the UK were exported to 20 nations, according to the study. Destinations included many middle-income and low-income countries such as Brazil, Colombia, Mexico, Ecuador, Guatemala and India. The highest numbers were recorded from shipments of Paraquat by Syngenta. “The company still manufactures the weedkiller at its factory in Huddersfield, West Yorkshire, although its use has been banned in this country since 2007,” the authors say.

Besides the Swiss corporation (which has been acquired by ChemChina in 2017), the investigation identified four other companies involved in the export of pesticides: the corporation UPL (India) and NuFarm (Australia) and the chemical companies Inovyn (which is controlled by the British firm Ineos) and Hockley International, a company based in Stockport, Greater Manchester.

Strong condemnation from the U.N.

Finally, Marcos A. Orellana, U.N. Special Rapporteur on the implications for human rights of the environmentally sound management and disposal of hazardous substances and wastes, has given a strong condemnation. “The UK,” he said, “is allowing an abhorrent practice that causes harm and suffering to people and nature in other countries”. Per questo, ha aggiunto. “The moral imperative of putting an end to the legalised exploitation and discrimination resulting from the export of banned pesticides is undeniable and urgent.”