The EU Commission has confirmed the validity of the signatures of the European popular initiative bill “Save bees and farmers”. Now the European institutions will have to express  on the request to ban synthetic pesticides, responsible for the collapse in the number of pollinators, by 2035

It should be clarified immediately: there is still a long way to go to arrive at a binding law that, throughout the EU, once and for all prohibits the use of chemical pesticides responsible for the collapse of populations of bees and other pollinating insects. However, the one decreed in recent days by the European Commission is at the same time a fundamental step on that path. Brussels has in fact certified the validity of the signatures collected, during 2021, by PAN-Europe (Pesticide Action Network). A continental network that has brought together over 200 organizations including environmental associations, biodistricts and operators in the agricultural and food sector. Objective: to launch a European Citizens’ Initiative (ECI). A legal instrument, provided for by the Treaties of the European Union, which allows citizens of the Member States to directly influence Community policy.

Save Bees & Farmers ECI is official! 🐝🐞🐦
Thanks to the +1 Million Citizens in all EU countries that gave their vote for #biodiversity, #health & a #PesticideFree Europe. Thanks to all organisations who helped to achieve this tremendous result🌻🍀🌷https://t.co/krt90WCfOi pic.twitter.com/QV6bSyiRUf

The requests of the signatories

Within it, the proposal, called “Let’s save bees and farmers”, contains three requests:

“The result achieved is a strong democratic signal for the EU and for national decision-makers who must take note of the will of the citizens and move away from toxic pesticides,” commented Martin Dermine, spokesperson for the popular proposal and executive director of PAN Europe. “Farmers and science have shown that agroecology can feed the world without chemicals. The time has come for our politicians to stop listening to agri-food and start working for the future of our children “.

Over half of the signatures come from Germany

Reaching one million signatures now requires the European Commission to take a stand on the proposal. And the European Parliament will have to hold a public hearing on the matter. Although the popular proposal does not have the power to impose anything on the Community institutions, it is nevertheless a particularly significant achievement. To date, only 6 other ICEs have in fact managed to obtain the number of signatures required to make them valid. EU rules establish that the million subscribers belong to at least a quarter of the member states. In the case of the PAN Europe initiative, all 27 EU countries were involved.

But for the exploit the sensational results obtained in Germany (where over 526 thousand signatures were collected), the Netherlands (almost 100 thousand) and France (almost 90 thousand) were decisive. In Italy, 43,400 citizens signed the initiative.

In 25 years, the toxicity of pesticides has doubled

“Collecting 1 million valid signatures during the Covid pandemic is a strong signal for a transition to agriculture that respects the climate and bees” underlines the Austrian Helmut Burtscher-Schaden, deputy spokesperson for Ice. “In many countries of the ‘ EU, ministries of agriculture seem to have unhealthy faith in agribusiness or too close relations. Therefore, they avoid changes that would free our food system from addiction to chemicals ”.

Despite the reluctance of various EU countries, the need to block the use of pesticides that damage bees and other pollinators has over time been confirmed both at a scientific level and by international organizations. For example, a study by the University of Koblenz and Landau in Germany showed that, in the last 25 years, the toxicity of 381 pesticides to bees, other pollinating insects and aquatic invertebrates has more than doubled, despite the fact that German research has confirmed a decrease in the overall use of pesticides. However, neonicotinoids, insecticides chemically related to nicotine, particularly toxic for bees, have increased. Similarly, the use of pyrethroids has also grown, which particularly damage aquatic invertebrates such as crustaceans, mayflies and dragonflies.

“Neonicotinoids are systemic pesticides“, explained Ralf Schulz, professor of ecosystem resilience at the University of Koblenz and lead author of the study. “They are then absorbed by the plants and travel through their tissues. Many pollinators are in fact closely correlated with the target species that pesticides aim to eradicate. The spraying of crops with neonicotinoids therefore also causes the death of bees”.

90% of the world’s food depends on bees

The consequence of all this risks having serious consequences, not only on the environmental front but also on the food safety and health of agricultural land. “Three out of four food crops in the world depend to some extent on bees and other pollinators. However, the die-off of these insects is growing. Yet the global food economy is showing a significant increase in the demand for pollination services, especially in developing countries, “the FAO recalled on the last World Bee Day last May. “Without bees, a large number of wild and cultivated plant species would no longer exist. As many as 71 of the approximately 100 species of crops that provide 90% of food in the world are in fact pollinated by bees ”explain the technicians of the UN Food Agency. 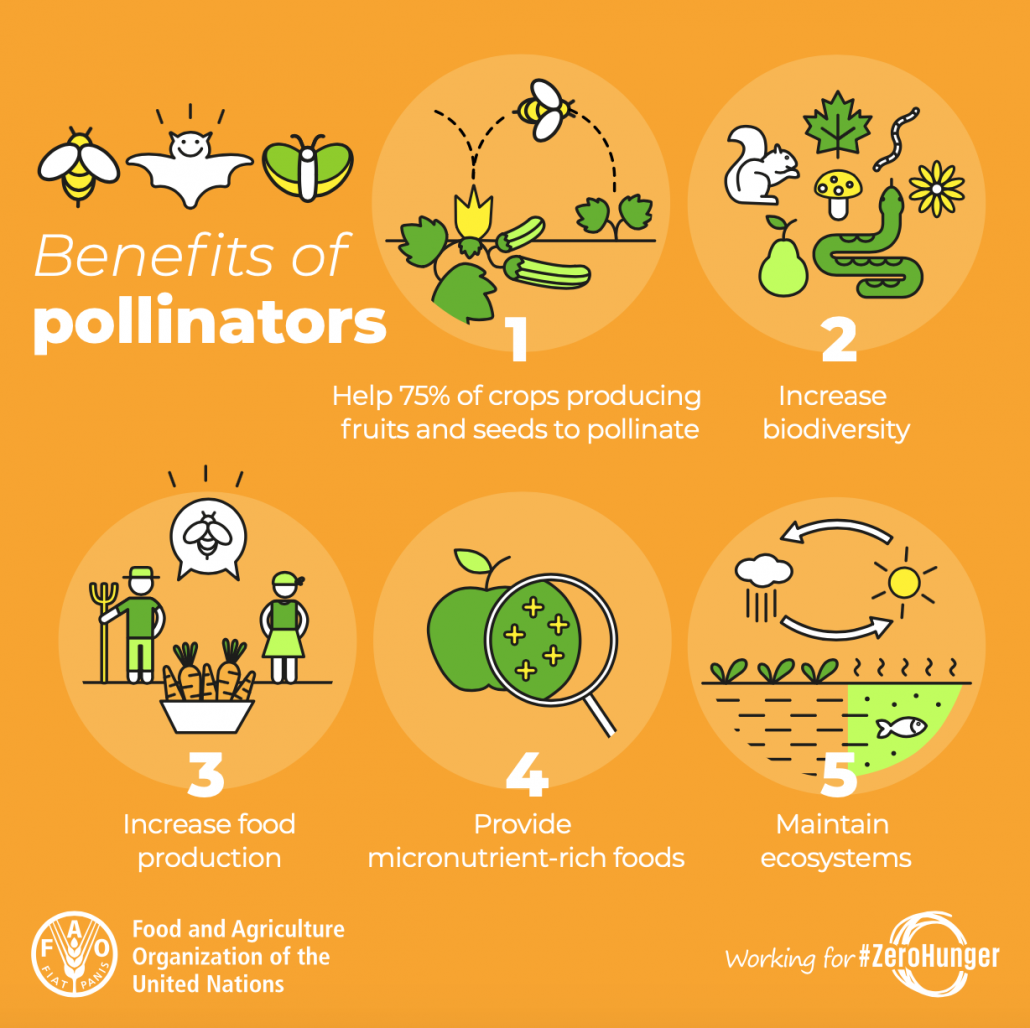 Bees and pollinating insects in general play a crucial role in our food security and ecosystems. Here, 5 of the “services” guaranteed by their presence. SOURCE: FAO Archive.