Pixabay License. Free for commercial use Attribution not required

U.S. study: in some urban areas, extensive tree cover can lower temperatures by nearly 6°C. And there are other benefits

Urban trees are just like “stationary superheroes” or maybe symbols of resilience to climate change and its consequences. Including “more frequent heat waves” according to The New York Times. The topic is tragically contemporary as extreme temperatures in July have hit Canada and the US. Every year, the newspaper writes, the excessive heat kills 12,000 Americans, more than the victims of hurricanes and other dangerous weather events. However, latest studies have confirmed, the urban plants can make a crucial contribution by lowering temperatures by several degrees.

In the most covered areas temperatures drop by 6°C

In recent years, a study published in Proceedings of the National Academy of Sciences of the United States of America, has detected the variability of temperatures in an urban context highlighting the correlation with the prevalence of trees. The analysis focused on the city of Madison, Wisconsin. Here, by using high-precision sensors, the authors managed to measure the air temperature along 10 different routes of 7 km with a repeated measurement, from 3 to 12 times, every five meters. In the surveyed areas, tree cover varied between 0 and 100 percent. The maximum cooling efficiency, says the study, is reached after exceeding 40%.

In detail, researchers say, “Variability in daytime air temperature within the urban landscape averaged 3.5 °C (range, 1.1–5.7 °C).” At the highest efficiency points, in other words, the interaction between the trees and landscape resulted in a temperature drop of nearly 6°C. A variation that could really make a difference when temperatures are extreme. 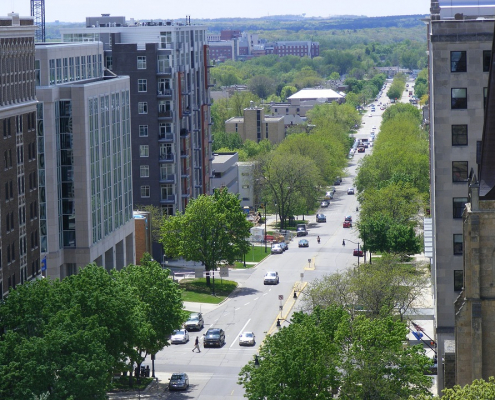 In Madison, Wisconsin, areas with more trees experience an average temperature drop of 3.5°C when compared to other areas of the city. Photo: Pixabay License. Free for commercial use Attribution not required

“Trees are the most effective technology against the heat”

Relying on a natural solution offers several benefits, the NY Times says. These include reduced electricity demand for air conditioners, financial savings and lower emissions. Not to mention the ability to prevent overload blackouts on warmer days. In short, says Brian Stone Jr., professor of environmental planning at the Georgia Institute of Technology, “Trees are, quite simply, the most effective strategy, technology, we have to guard against heat in cities.” Urban planners who have been focusing on increasing green spaces are totally aware of this. But America is definitely not doing enough.

Wildfires cause long-term damages to soil. A couple of lessons from the US and Europe

U.S. urban forests save more than $18 bn a year

Even so, New York Times writes, “Despite longstanding and ongoing efforts across the country to plant trees, communities in the United States are not adding to their total number or even maintaining it. Research shows that American cities and towns lose the canopy of 36 million trees every year.” Lack of awareness is maybe the biggest challenge since many people seem to ignore several effects of urban trees including less electricity consumption and lower emissions, less pollution and more carbon sequestration. According to an estimate by the U.S. Department of Agriculture’s Division of Forestry, this translates into $18.4 billion economic benefits per year.