Former President Bolsonaro had blocked it in 2019. The country’s highest court ruled that the financial vehicle must be operational again within 60 days. After his reelection at the end of October, Lula will thus have at his disposal a fund with credits worth more than $20 billion

Brazil will have to reactivate the government fund intended to finance the protection of the Amazon, the Supreme Court has stated. The Court ruled a 60-day time limit after which the financial vehicle must become operational again. The move takes on obvious political significance by ideally ending a three-year period of inaction that began with the controversial measure promoted by former President Jair Bolsonaro, who had blocked the fund in 2019 challenging its alleged misuse.

In response to Bolsonaro move, main contributors Germany and Norway had in turn suspended funding to Brazil. The reactivation of the fund is expected to pave the way for the resumption of rehabilitation and conservation operations in endangered territories in line with promises made by newly elected President Luiz Inácio Lula da Silva, who won the ballot that decided the presidential election last Oct. 30.

The Amazon Fund is considered a pioneering initiative with the capacity to finance more than 100 projects by public entities and nongovernmental organizations worth more than 1 billion reais (nearly $200 million), writes newspaper O Globo.

“In addition to supporting original communities and NGOs working in the region,” the newspaper points out, “the Amazon Fund also provides resources to states and municipalities for actions to curb deforestation and fires. One of the recent examples was the purchase of a 12 million reais plane used in the state of Rondônia to take firefighters to firesites and map the extent of the flames.”

According to an audit report prepared by the Union’s Comptroller General’s Office (CGU), as of December 2021 the Fund had about 3.2 billion reais ($640 million) in unused funds. And a staggering $20 billion in estimated credits.

An indictment of Bolsonaro’s policies

Also in the report, the CGU targeted Bolsonaro’s choice to eliminate the fund’s main collegial bodies: the Steering Committee of Federal Councils (COFA), composed of representatives from the federal government, state governments and civil society, and their Technical Committee (CTFA). Which included independent experts. According to the auditors, O Globo further writes, “the Ministry of Environment’s choice to extinguish the committees was made without technical justification or planning to adequately manage the risks associated with the decision.”

This choice, the paper says, “caused the suspension of the authorization of new projects under the Fund and put at risk the results of the public policies it supports.”

The result, argues Angela Kuczach, executive director of Rede Nacional Pró Unidades de Conservação, the National Network of Conservation Units, has been the dismantling of environmental policies in the Amazon by the federal government. And the initiation of a “concrete plan” to prevent projects from moving forward. Which has resulted in a significant increase in deforestation. 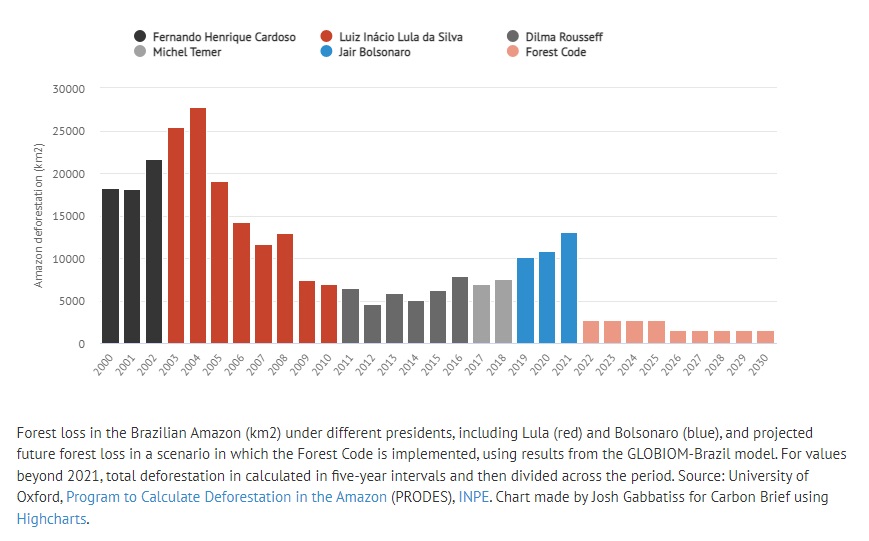 The numbers are widely known. According to a survey by the Brazilian NGO Instituto Centro de Vida, Greenpeace’s Unearthed and the Bureau of Investigative Journalism, after experiencing widespread deforestation between 2000 and 2004 that led to the destruction of nearly 28,000 square kilometers of land, the Amazon has since experienced a real turnaround. So much so that from 2004 to 2012 tree felling decreased by 84 percent.

Forest destruction returned as early as during Dilma Rousseff’s presidency. But it is with Bolsonaro‘s election at the end of 2018 that the process of indiscriminate exploitation of the territories has accelerated dramatically.

Over the past four years, Carbon Brief wrote in September, the outgoing president “has weakened existing environmental protections and legitimised illegal activity.” Thus, in the first three years of his administration alone, the Amazon has lost 34,000 square kilometers of land. An area, by comparison, greater than the size of Belgium.