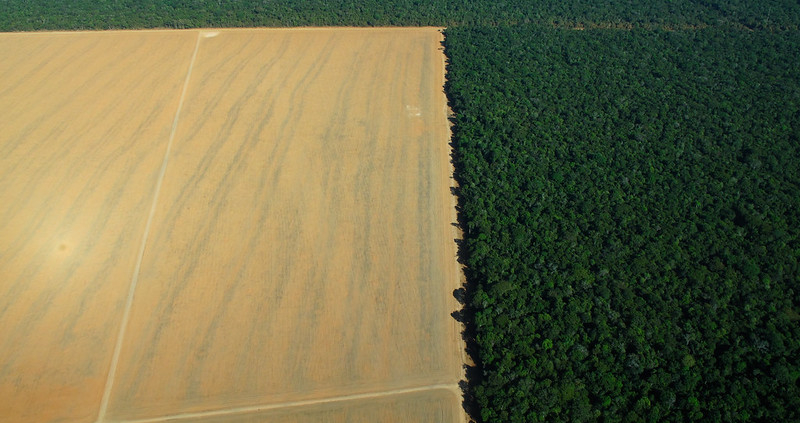 Deforestation in the Amazon reaches new highs as soya crops can still indirectly cause it, pushing farmers to give up their land and look for new spaces in the region, says Greenpeace investigation

International agreements designed to protect the Amazon are failing to stop the deforestation drive by soya farmers. In the last decade, in fact, the sector has been responsible for the destruction of 1,180 square kilometers of forest, according to a study released in recent days by the Brazilian NGO Instituto Centro de Vida, Greenpeace’s Unearthed investigation center and the Bureau of Investigative Journalism.

Deforestation, the authors explain, took place in the state of Mato Grosso where, between 2009 and 2019, soya companies opened new spaces for other crops or to provide grazing land for livestock. “The majority of this deforestation was illegal,” the study says.

ICYMI: We revealed some 1,200 sq km of Amazon rainforest has been razed on Brazilian soya farms – and that those farmers can still badge their soya as "deforestation-free"

Soya from the worst-hit areas is regularly shipped to the UK & EU for animal feedhttps://t.co/Hs91azhQgA

The 2006 moratorium has proven useless for the Amazon

In 2006, a number of major European companies signed a moratorium to protect the Amazon. The agreement banned the sale of soya grown on land deforested after 2008. The restrictions, however, do not apply to other products such as beef and other crops.

That means large agribusiness players could keep expanding the land under their control to extend crops and livestock while continuing to sell deforestation-free certified soya on the market.

“The findings undermine claims by some global meatpackers, animal feed companies and supermarkets that soya is no longer directly linked to Amazon destruction,” the researchers explain.

Analyzing satellite data, which are known to be a valuable resource for land status surveys, the authors found that only 7% of the deforested land in Mato Grosso in 2018 was allocated to soybean cultivation. Soya crops, however, have been expanding in the Amazon, especially in previously deforested land.

“That expansion can still indirectly cause fresh deforestation,” the authors explain. “As ranchers sell up to farmers at a profit and move deeper into the forest, where land is cheaper.”

The responsibilities of the US and Europe

The researchers’ investigations extended to the large companies buying products from the Amazon region. These include U.S. corporations Cargill, which also operates in the European market, and Bunge, which supplies the Spanish market. “In 2021, Spain imported 878,000 tonnes of soya from municipalities with at least 7 sq km of hidden deforestation on soya farms,” says the research.

Moreover, in 2020, “the UK imported more than 140,000 tonnes of soya from municipalities with at least 7 sq kms of hidden deforestation on soya farms, and about 50,000 tonnes of corn – also used for animal feed.”

The study’s findings come in a highly troubling time for the Amazon. After experiencing widespread deforestation between 2000 and 2004 that led to the destruction of nearly 28,000 square kilometers of land, the region has enjoyed years of quiet stability. From 2004 to 2012, in fact, deforestation dropped 84%.

“But in recent years deforestation has been climbing steeply again,” the authors say. This was encouraged “by President Jair Bolsonaro’s anti-conservationist rhetoric and policies.”

The problem, perhaps, is not so much the lack of official commitment. Instead rules enforcement has proved very weak. “Facing international pressure from the United States and Europe, Brazil last year pledged to end illegal deforestation by 2028 and signed a global pact to stop all forest destruction by 2030,” Reuters says. “Soon after those commitments, Inpe released data showing that deforestation in 2021 in the Brazilian Amazon hit the highest point in 15 years. The preliminary data for January shows the destruction is continuing to mount.” In first month of 2022 the Amazon lost 430 square kilometers of forest. Five times more than in January 2021.