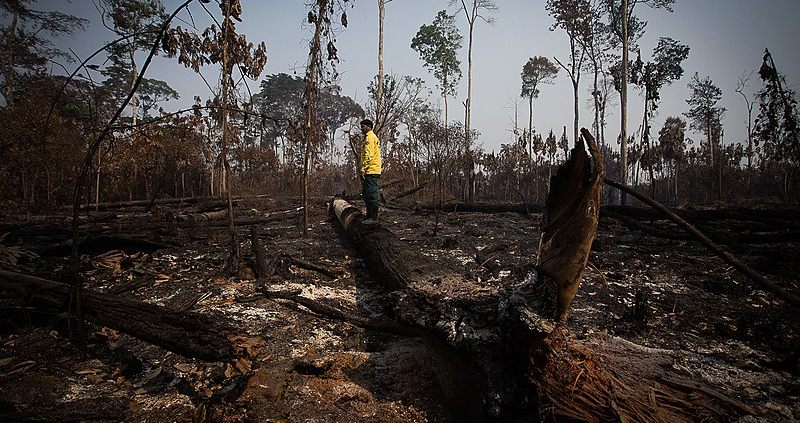 Amazônia Real from Manaus AM, Brasil Attribution 2.0 Generic (CC BY 2.0)

FAO announces the launch of a Data Partnership to tackle deforestation. The initiative is based on geospatial information, which is being increasingly used in recent years to monitor soil and risk areas

Using geospatial data to curb deforestation fueled by agribusiness. That’s the goal set by FAO and the World Resources Institute (WRI) with support from the U.S. Agency for International Development (USAID). The operation, which requires a total investment of $13.7 million, was announced at COP26 in Glasgow. FAO, in particular, wants to involve each single country, starting with developing nations, to counter the problem and tackling climate change. The operation will engage various partners including Google and NASA.

The problem is well known. A dramatic development of intensive agriculture and large-scale livestock farming has encouraged deforestation, especially in emerging economies with the Amazon forest as the epicenter of the issue. Between 2002 and 2018, the NGO Global Witness argued, the Brazilian Amazon lost more than 20 million hectares of tropical forest, “equivalent to an area almost the size of the UK.” In the first five months of 2021, according to Reuters, deforestation in the Brazilian area of the Amazon increased by 25% year on year.

During the COP 26 summit in Glasgow, 138 countries have signed a declaration with the aim of “to halt and reverse forest loss and land degradation by 2030 while delivering sustainable development and promoting an inclusive rural transformation,” Fao says.

In prevention and law enforcement, monitoring is as essential and complicated. Exploring the forest, in fact, is not always easy. The operation takes time and, in any case, does not allow to get an overall picture of the situation. The use of technology, however, allows to solve the problem. Geospatial data, in particular, are crucial. In other words, aerial or satellite images captured remotely by sensors or different instruments and made accessible to operators can provide the required information.

The project announced in these days, called Forest Data Partnership, will also involve Unilever and will be based on the use of the NASA-USAID SEVIR program. “The initiative will work towards a consistent geospatial data ecosystem so that all actors – local, government, producers, traders, and financiers – are able to access consistent, open-source, publicly available, and validated geospatial data related to forest-risk commodities and restoration”, says FAO. Data, moreover, “will enable credible and systematic monitoring and verification, which is vital in understanding and preventing deforestation and restoring degraded lands”.

This is not the first time operators have employed remote sensing with the goal of monitoring and preserving soil health. Recently, for example, researchers at the University of Massachusetts Amherst used satellite imagery collected by NASA to assess the condition of farmland in the U.S. Corn Belt. The University of Illinois, also with the help of the space agency, has designed a model capable of describing the history of an agricultural field and evaluate the better management decisions.

In South America, indigenous communities in the Peruvian Amazon have been monitoring their territories since 2018 through the use of drones and a smartphone app. The information gathered in this way is processed in a regional center that also use images from satellites. In this way, say the three non-governmental organizations that promoted the project – the Rainforest Foundation US, the World Resources Institute (WRI) and ORPIO – the areas concerned have seen a sharp decline in deforestation: -52% in the first year, -21% twelve months later.