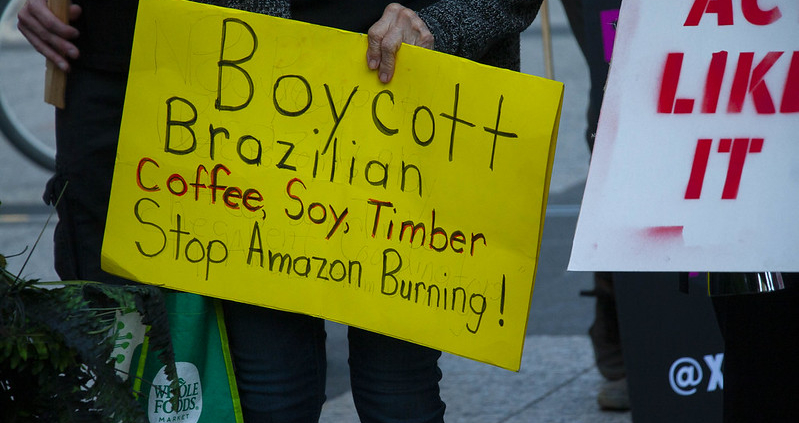 According to the Financial Times, more than a year after the appeal against the Brazilian government, most of the major firms are still investing in companies linked to the deforestation of the Amazon

When faced with the growing deforestation of the Amazon, the financial sector can play a primary role. Banks and investment funds, in fact, may use a strong weapon for influencing national policies and changing governments’ choices: the threat of divestment. However this strategy still appears to be very little widespread, says the Financial Times.

Only two disinvestments in a year and a half

Everything started in June 2020 when dozens of financial companies and funds wrote a letter to the Brazilian government calling for a greater protection of the planet’s largest forest. Seven of them, in particular, had threatened to divest from some of the major companies linked to deforestation. Including the biggest livestock and agricultural commodity companies.

Over a year later, however, only two firms have made the most radical choice: the Dutch company Robeco and the Scandinavian bank Nordea, based in Helsinki. Nordea, in particular, sold a $40 million stake in Brazilian meat company JBS.

Deforestation in the Amazon at 15-year high

And the others? They have chosen the road of the dialogue with the goal of influencing the choices of companies, the FT says. This strategy is called ‘engagement’, whic basically means to open a direct channel with companies and governments in order to encourage the resolution of the problem. This approach, adopted by the British asset manager LGIM and the pension funds KLP (Norway) and AP7 (Sweden) mong others, is perfectly legitimate. But many doubts remain about its effectiveness as deforestation accelerate.

“More than 13,200 sq km of rainforest was razed in the 12 months between August last year and July,” Financial Times says. That’s “a 22 per cent jump from the previous year and the highest rate of deforestation in 15 years.”

Large financial institutions in the spotlight

The responsibility of the financial firms in supporting environmental devastation is well known. In 2019, a report by the organization Portfolio.earth accused the Planet’s largest banks of contributing with more than $2.6 trillion to projects linked directly or indirectly to the destruction of ecosystems and wildlife. The list included some of the biggest American institutions such as Bank of America, Citigroup and JP Morgan Chase. These institutions were responsible for 25% of the loans made.

More recently, a study by the NGO Friends of the Earth and the independent research company Profundo has focused on the three largest banks in the Netherlands: ING, Rabobank and ABN AMRO. Between 2016 and 2020, according to the researchers, the dutch institutions have financed with 3.1 billion euros some commodity players linked to deforestation and human rights violations.

EU legislation could be crucial

A possible breakthrough could now be coming from Brussels. In November, the European Commission presented its proposals to block the import of raw materials linked to deforestation. Companies, in particular, will be required to ensure the traceability of purchased products. Thus excluding controversial companies from the supply chain.

“If the proposal is made law, it could sharply affect Brazil’s big meatpackers, such as JBS and Marfrig, but also international grain traders, such as Cargill, which maintain operations or source produce in the Brazilian Amazon and the Cerrado savannah region,” writes the Financial Times. The legislation, in any case, has yet to be examined by the Council and the European Parliament.