The forecast is contained in an analysis carried out by the research company Technavio. The expected average growth rate is 17% on a five-year basis. To push the biopesticides sector the negative sides of conventional products of chemical origin in environmental and health terms, in addition to the spread of organic agriculture

On the one hand, the increase in pests caused by global warming that cause up to 35% of agricultural yield losses. On the other hand, the increased awareness of the many dark sides that synthetic pesticides are the children of traditional chemistry, which has led producers to seek alternative solutions and consumers to reward those who have already succeeded. The result of this conjunction is a significant growth in the world of biopesticides. How many? $ 4.45 billion by 2025. An average growth rate (CAGR) of 17% on a five-year basis. The estimates are contained in an analysis carried out by the market research company Technavio. 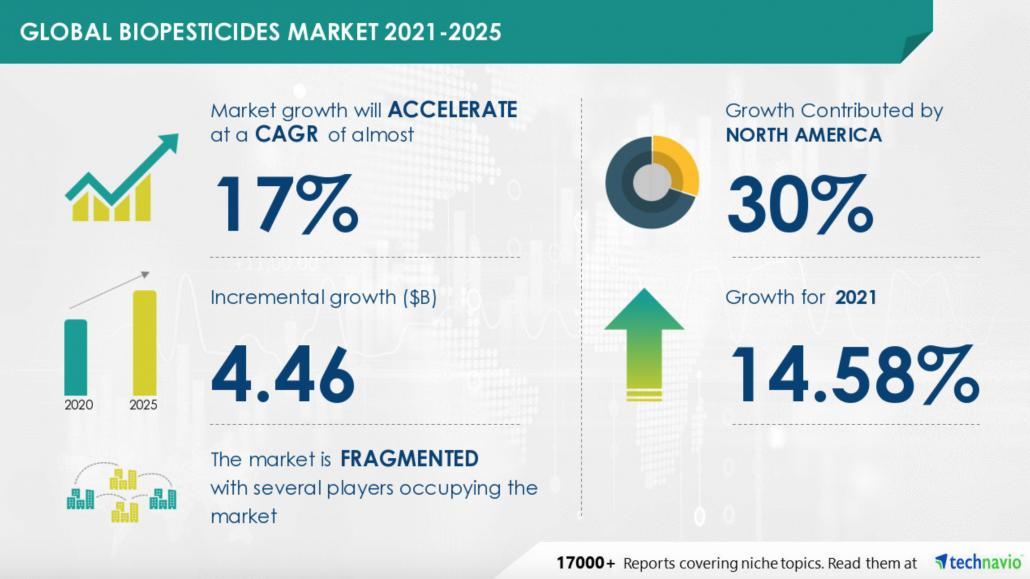 The main results of Technavio research on the bioherbicides sector.

Bioherbicides will lead the group

Biopesticides are plant protection products developed from natural compounds. The term includes all biological control agents and includes both living organisms and the natural products deriving from them, capable of containing plant pathogens. Their advantage over synthetic pesticides lies above all in the absence of substances that could harm farmers, soils, auxiliary fauna and the final consumer.

The report, which takes into account several sub-categories of biopesticides (such as bioherbicides, biofungicides and bioinsecticides), predicts that North America will be the global area in which the highest incremental growth (+ 29.5%) will be recorded, offering several opportunities. growth for suppliers. This is not new because already in 2021 it was North America, with the understandably decisive contribution of the United States, to lead the biopesticide market, in which the highest demand was registered for bioherbicides.

Subsequently, the best performances were recorded by Europe, the Far East and the Pacific, Latin America and the Middle East. 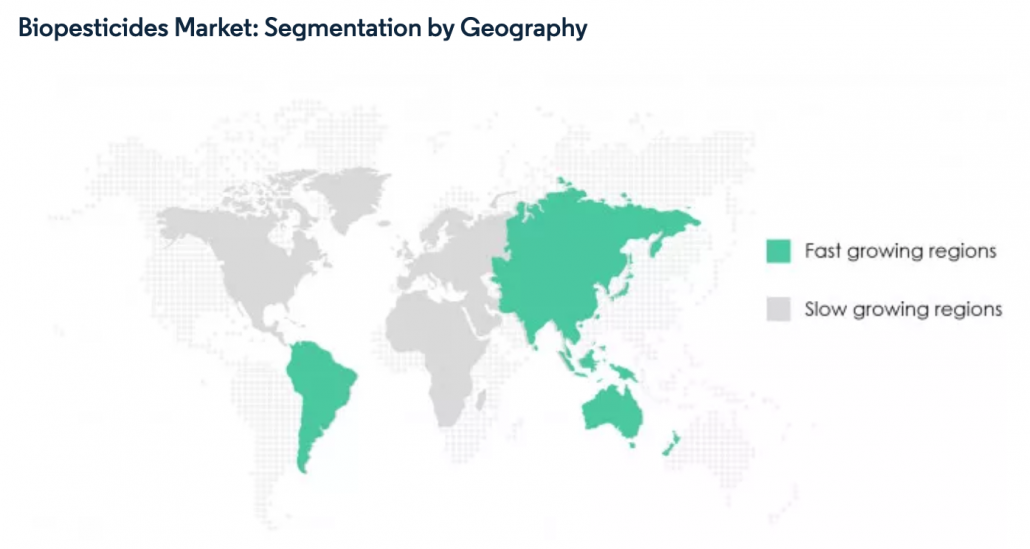 The growth of the biopesticides market segmented by geographic area, according to the Technavio analysis. SOURCE: Technavio.

Warmer, more parasites throughout the year

Underlying this probable growth, as mentioned, there are at least two factors to consider. First, global warming is acting as a catalyst for the pesticides that infest agricultural production. This is because the increase in carbon dioxide levels in the atmosphere increases the simple sugars present in the leaves. In turn, this increases the number of insects on plants. Not only that: as it gets hotter, conditions are increasingly being created that ensure the survival of parasites even in traditionally colder periods.
To this is added, in a vicious circle that threatens the health of plants and soils (and with them, global agricultural yields), the increase in resistance to synthetic pesticides and the increase in the phenomenon of parasite migration. It is inevitable that all this pushes agricultural producers to change course, identifying more natural solutions capable of adapting to changed climatic conditions.

The (positive) factor of organic farming

The consumption and nutrition behaviors of citizens, particularly in the richest areas of the planet, encourage this transition. In particular, the report highlights the positive contribution offered by products made according to the principles of organic farming. Their demand is growing globally. Either for the growing awareness of the benefits in environmental terms and for human health, or for the growth of disposable income in certain areas of the world. 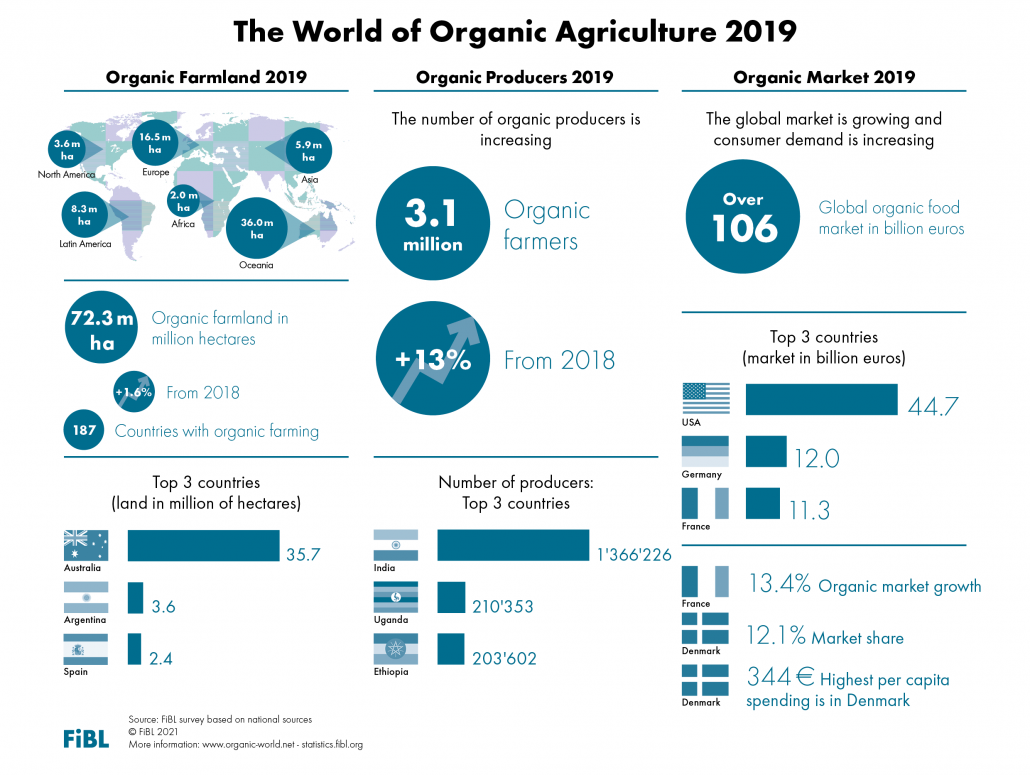 The risks of using synthetic pesticides in agricultural practices are also well known among consumers. They can enter the human body, through fruit, vegetables but also through the consumption of meat, causing various health problems: skin irritation, damage to the nervous system, up to fertility problems and, in some rare cases, even death. Not to mention the environmental degradation caused by the products obtained with intensive agriculture.

It is important to have the right rules

Obviously, however, the regulatory systems and economic incentives that help the growth of the sector will be decisive. The policies implemented by the European Union, starting with the 848/2018 directive which came into force last year and the Farm to Fork and biodiversity strategies, are examples to follow. Technavio analysts themselves indirectly confirm this. “The advances in biological pest control measures – the researchers argue – will further accelerate the growth of the market, while on the contrary the lack of profits in organic farming could reduce it”.
EU policy is betting on the positive effects of sustainable crops. In fact, in fields subject to organic cultivation, the CO2 absorption rate is 3.5 times the figure found in conventionally cultivated soils. A confirmation of the link between contrasting climate change and the spread of parasites that endanger agricultural yields and soil health.
https://resoilfoundation.org/wp-content/uploads/2022/02/herbicide-g5ea7538ef_1280-1.jpg 847 1280 Emanuele Isonio https://resoilfoundation.org/wp-content/uploads/2020/01/logo_resoilfoundation.png Emanuele Isonio2022-02-21 11:00:522022-02-15 19:14:18Biopesticides, a 4.5 billion dollar market