The UN organization unveils the “State of Land and Water 2021”: human action causes degradation in 1.66 billion hectares of land. Agriculture and ecosystems. “Agricultural production and ecosystem services are more endangered where economic growth is needed most”

Resources are pushed to the limit, in a now polarized system. “While fragmentation of smallholders concentrates subsistence farming on lands susceptible to degradation and water scarcity,” says the report. To reverse the trend, we need to safeguard environmental services. But that doesn’t mean limiting the growth of agriculture required to meet food security. Which won’t be easy.

Numbers are worrying. Worldwide, land subject to human-induced degradation amounts to 1.66 billion hectares, half of which is already in a highly critical condition. Over a quarter of this area, 466 million, is located in developing countries. Sub-Saharan Africa is the region most affected in absolute terms with 330 million hectares, or 14% of its surface. Southern Asia, on the other hand, is the most damaged area in relative terms given that the problem affects 41% of its territory (180 million out of a total of 439).

“Human-induced land degradation, water scarcity and climate change are increasing the levels of risk for agricultural production and ecosystem services at times and in places where economic growth is needed most.”

Exploitation of land and water resources, researchers say, has not yet reached its peak. However, “All evidence points to slowing growth in agricultural productivity, rapid exhaustion of productive capacity and generation of environmental harm.” 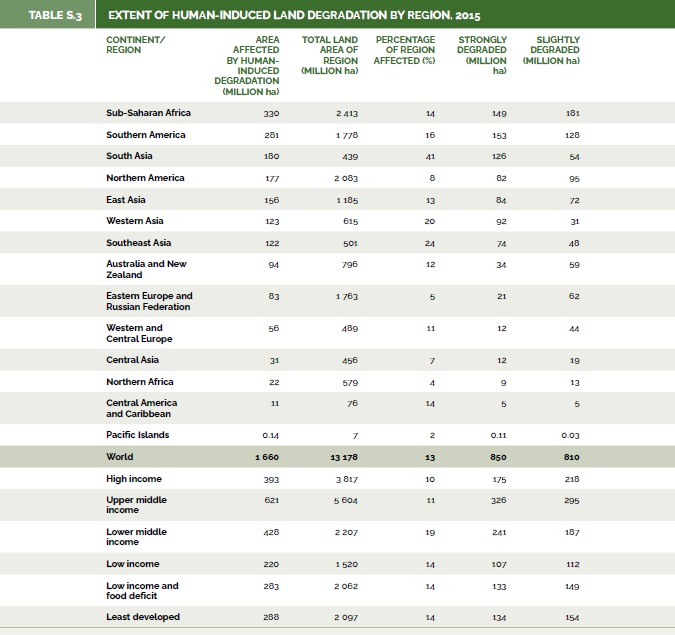 The problem is that, in such an environment, agriculture is required to make a huge effort. Between 2014 and 2020, the undernourished population increased from 604 to 768 million people. According to FAO’s own estimates, to meet the Planet’s food demand in 2050 – when the total population will be 9.7 billion – agricultural production of food, feed and biofuels will have to increase by 50% compared to 2012 levels.

Today, however, “Options to expand cultivated land areas are limited. Prime agricultural land is being lost to urbanization. Irrigation already accounts for 70 percent of all freshwater withdrawals.”

Intensive practices, along with the use of pesticides and fertilizers and the use of monocultures contribute to degradation, creating a vicious cycle. Uncertainty related to climate change is one more problem. In the end, what we need is “To reduce land degradation and emissions and to prevent further pollution and loss of environmental services while sustaining production levels”. a large-scale planning for the sustainable use of land and water resources thus becomes crucial. 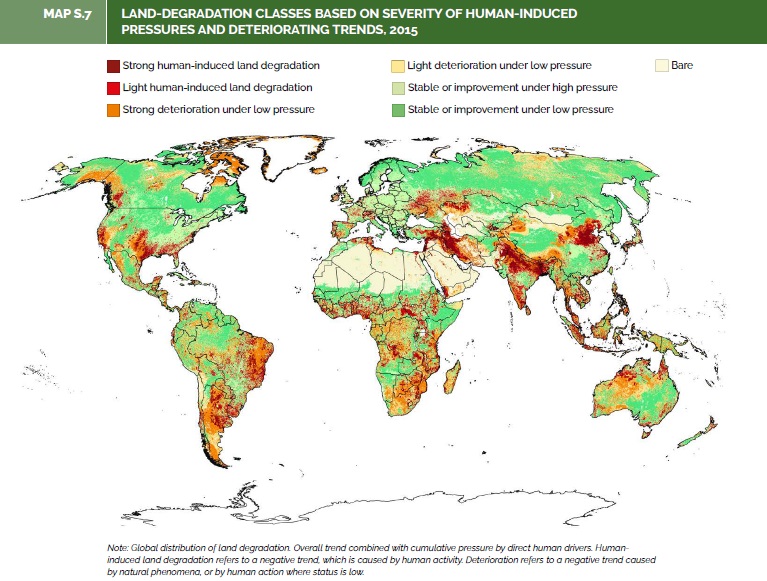 Soil, of course, is the main indicator of the emergency. On the most worrisome of the degradation trends, FAO says, is the progressive salinization of lands. A problem that affects 20 to 50% of all agricultural land on the planet, impacting the lives of more than 1.5 billion people.

“Soil salinity is estimated to take up to 1.5 million ha of cropland out of production each year”, says the report. “Higher rates of evapotranspiration are expected to exacerbate the accumulation of salts in the surface horizons, but the extent of subsoil salinity at the 30–100 cm depth range is much more pronounced.” Conventional agriculture is also a key factor in climate alteration. That’s why we need to focus on conservation techniques that “can halt, and in some instances, reverse the loss of soil organic carbon.”

Actions for the future

According to the report, public policies have so far failed to take care of the long-term future of land, soil and water. Therefore, the authors suggest four key actions. The first is to adopt inclusive governance that takes a multidisciplinary approach by involving different actors, including civil society, academia, local communities and the private sector. In addition, it is necessary to undertake initiatives on a global scale thanks to the commitment of the international community.

Also crucial is the contribution of innovative technologies to support agriculture and soil health, such as remote sensing, cloud computing and data sharing systems. Finally, it is critical to invest in long-term sustainability by defining investments in agriculture as needed. “Emerging events following the advent of COVID-19 in early 2020 also need to be part of future investments”, says the report. “As they have exposed vulnerabilities in global supply chains that are still playing out.”