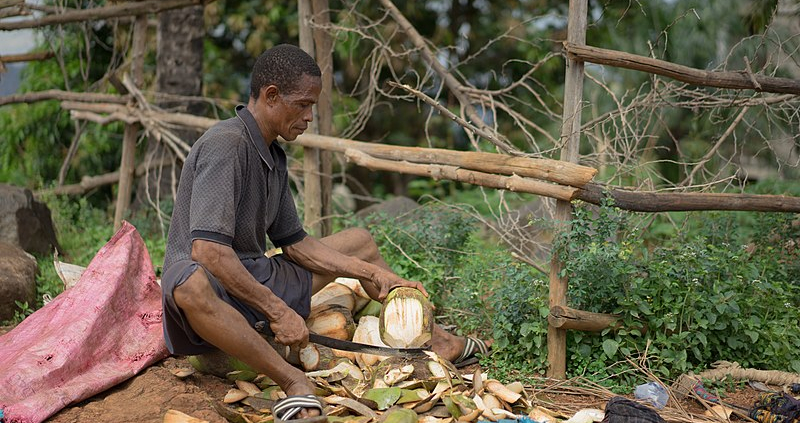 A circular solution against deforestation in West Africa. Alhaji Siraj Bah, a young innovator from Freetown, Sierra Leone, bets on coconut waste to offer an alternative to wood-based fuel

From tragedy to a new beginning. It may happen in Africa, where human and environmental adversities can often inspire new solutions in the name of innovation and sustainability. This is the story of Alhaji Siraj Bah, 22 years old startupper who heads Rugsal Trading, an innovative company based in Freetown, Sierra Leone. The world”s 9th poorest country.

West Africa, August 14, 2017: a flood sweeps through the capital taking 1,141 lives. Members of Alhaji’s adoptive family, which had rescued him from the streets for about a year before, are among the victims. The boy, then seventeen years old, is forced to react.

“I lost my adopted parents in 2017 during a mudslide disaster in Freetown,” he said a few years later. “I discovered that this was caused by high deforestation in the area and improper waste management, which motivated me in my cause.” That’s how it all began.

Four years after the tragedy, The Washington Post wrote in December, “Bah runs his own business with nearly three dozen employees and an ambitious goal: Reduce the felling of Sierra Leone’s trees — a loss that scientists say amplifies the mudslide risk — by encouraging his neighbors to swap wood-based charcoal for a substitute made from coconut scraps. Heaps of shells and husks discarded by juice sellers around Freetown provide an energy source that requires no chopping.”

To date, Rugsal Trading has produced more than 100 tons of coconut-made briquettes that can be used as fuel in a circular process. In short, by reusing waste products, the African company is able to offer an alternative to wood-based products, thus curbing deforestation.

15 thousand trees have already been saved

These products look unique because of their slow consumption . “Bah learned from YouTube how to produce smoke-free briquettes, which he says burn for four hours longer than coal or wood” says Washington Post. “He collects coconut shells, sugar cane, rice husk, and palm kernel waste from farmers and households, grinds the raw material and binds it with starch before it is extruded through a machine.”

The company is also commited in other activities. “In addition, we make eco-friendly biodegradable paper bags from banana leaves to tackle plastic pollution” Bah said in another occasion. “Today we have produced more than 250,000 eco-friendly bags and more than 120 tons of clean and smokeless briquettes from coconut, saving thousands of our mothers, wives and sisters from health risks by providing them with clean and affordable fuel, while saving more than 15,000 trees.”

This Sunday, we will talk to one of the nominees for the 2022 African Genius Awards, Alhaji Siraj Bah. Bah is a Sierra Leonean entrepreneur and the founder of Rugsal Trading, a company that produces handcrafted paper bags as well as briquettes for cooking fuel. #SaloneTwitter pic.twitter.com/w2W6flc09E

A message for Africa

Bah’s experience is still attracting attention. Recently, the young startupper was nominated for the 2022 edition of the African Genius Awards, the recognition given by Johannesburg-based firm Plus 94 to honor innovative excellence in Africa. Winners will be be announced in May. Meanwhile, researchers has provided further support to the importance of anti-deforestation efforts.

In recent weeks, in fact, a British study published in the American journal Proceedings of the National Academy of Sciences has pointed out the correlation between deforestation and the increasing frequency of tropical storms in coastal areas of West Africa.

The loss of tree cover – said the authors – leads to higher temperatures that strengthen the intensity of the breeze coming from the sea, thus triggering storms on deforested areas where devastating rivers of mud and debris are easily generated. As it happend in August 2017.