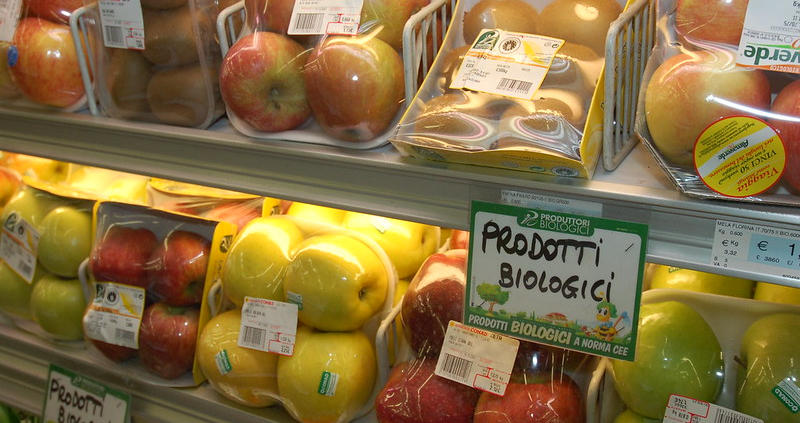 Organic land in Europe covers more than 17 million hectares, with a 5.3% increase year on year. But the biggest surge comes from consumers: in the midst of the pandemic, sales mark the highest growth of the decade

Land area devoted to organic farming is growing in Europe, latest data released by the Research Institute of Organic Agriculture (FiBL) has shown. In 2020, the last year for which complete data are available, organic farming in the European continent involved 17.1 million hectares, 14.9 of which within the EU. This last figure marks an increase of 700 thousand hectares, equal to 5.3% more than the previous survey.

Nevertheless, the numbers recorded by researchers show a slowdown in overall growth. Confirming a trend that has been underway for quite some time.

The European organic market reached a record high in 2020. The latest data are shown in the statistical yearbook "The World of Organic Agriculture 2022", which will be launched on Tuesday, 15 February 2022, from 12 to 1 pm (CET).https://t.co/ZPFRLpXlEk@FiBLStatistics pic.twitter.com/Vxzm4EaTd8

France, Spain and Italy are on top of the list

In the country ranking, France takes the first place with almost 2.5 million hectares of organic crops, followed by Spain (2.4 million), Italy (2.1) and Germany (1.7). Also certifying French supremacy is the data on annual growth with 307 thousand hectares higher than in 2019. The increase is smaller in Italy (102 thousand hectares) and Germany (88 thousand). 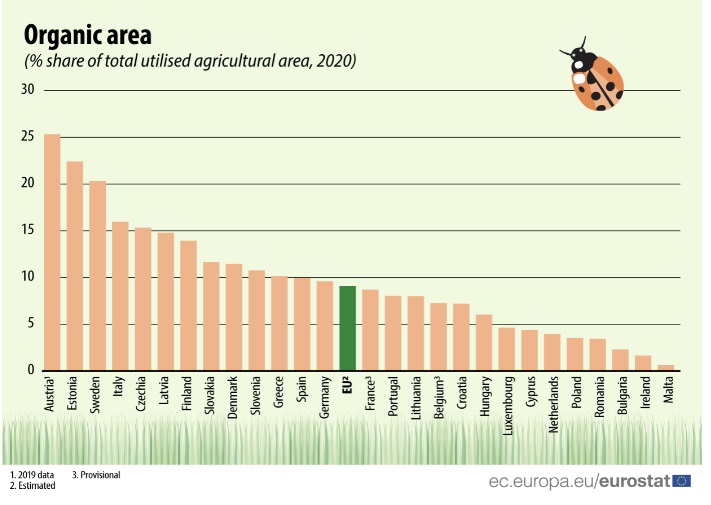 In the EU about 9% of agricultural land is used for organic crops. Source: Eurostat © European Union, 1995 – today, free re-use of data

In the period, says the Research Institute, “the organic markets in many countries exhibited double-digit growth due to the pandemic as people stayed home and began to cook more often.”

Key factors such as health, the environment and climate change, all of which seem to be increasingly influencing consumer choices, are also playing a crucial role. “If this trend continues,” the researchers say, “production and processing have to keep pace. The Farm to Fork strategy of the European Union can support this development with respective measures.”

USA is the world’s leading market

The industry’s growth momentum, in short, has proven stronger than external factors. This is definitively demonstrated by the global figure which, in the first year of the pandemic, is worth €120 billion, €14 billion more than in 2019. United States remains the leading market with a countervalue of almost 50 billion euros. In total, the Planet’s organic farmland covers 75 million hectares, 4.1% more than the previous year.

Almost half of the fields are located in Australia (35.7 million), the leading country in the ranking ahead of Argentina (4.5 million) and Uruguay (2.7). Finally, on a global scale, there are 3.4 million organic producers. 1.6 million in India alone.