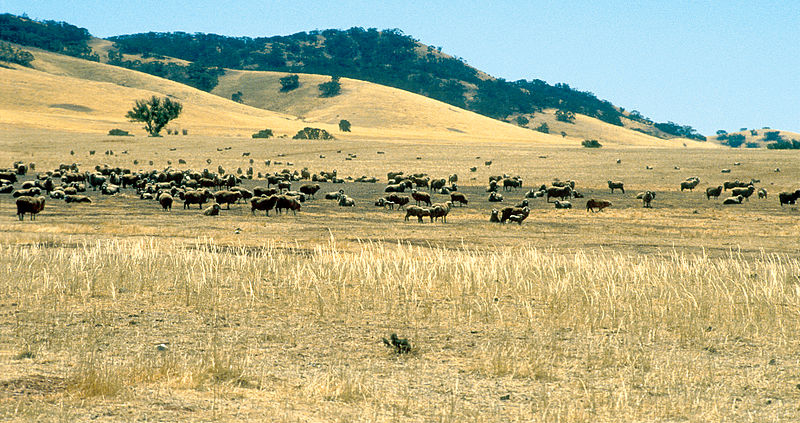 Grazing in drylands can have positive ecosystem effects, but rising global temperatures are likely to produce opposite consequences says a study by the Laboratorio de Ecología de Zonas Áridas y Cambio Global, a research center based in Alicante, Spain, and the University of New South Wales (UNSW) in Sydney.

“The ecosystem services affected by grazing include the ability of soils to grow plants, break down organic matter and make it available for plants, store carbon, create fertile soils and regulate water supply,” says a statement by the Australian university. “The researchers found that grazing pressure was critical for driving all ecosystem services, particularly for carbon storage, organic matter decomposition, soil fertility, and the quality and amount of forage produced.”

Cowboys for future. Here’s how cows and ranchers are fighting against climate change

Researchers surveyed 326 drylands in 25 countries by collecting information on plants and soils at sites with varying grazing pressure, resulting in a comprehensive analysis described as “unique.” In this way, scientists were able to assess the impact of animal presence on the ability of drylands to provide nine essential ecosystem services. Some sites were devoid of pasture, others showed high densities of sheep and cattle. Still others were characterized by the presence of wild herbivores such as zebra in Africa and llamas in Chile.

The researchers found that the level of grazing pressure itself affected the relationships between climate, soil conditions, biodiversity and ecosystem services. “The responses of some ecosystem services to climate varied with local grazing pressure,” said David Eldridge, a professor at the Centre for Ecosystem Science at UNSW Sydney. “For example, stocks of soil carbon declined and soil erosion increased as the climate became warmer, but only under high grazing pressure.”

The study found that different factors in combination determine the effect of grazing on soil. The effects of increased pressure, the scientists note, went from being predominantly positive in cooler drylands characterized by lower seasonal rainfall and more diverse vegetation, to negative in warmer dry soils with highly seasonal rainfall and lower biodiversity.

The research results, the authors thus note, suggest that the response of drylands to climate change may depend on how they are managed when temperatures rise.

“A diverse plant community can help us buffer the negative effects of climate change on dryland soils,” points out Fernando Maestre, researcher at the Dry Ecology and Global Change Lab and lead author of the study. In addition to this, the research points out, fauna has a crucial role. Indeed, a more diverse presence of different types of herbivores seems to favor some ecosystem services. Including carbon sequestration, which in turn has a positive effect in climate mitigation.

Regenerative grazing has a crucial role

The research findings also make a contribution to knowledge about regenerative grazing, the set of animal management practices designed to protect soil health. The main regenerative strategy is to grant long periods of rest to the soil to ensure its resilience. To achieve this result, farmers practice rotation of the pastures themselves by allowing animals to move to different and separate plots from time to time. Thus avoiding the degradation typically associated with an excessive and prolonged presence of herbivores.

Regenerative grazing has long been the subject of studies focusing on the potential of properly managing suitable expanses for this purpose.

According to a research published in the journal Agriculture, Ecosystems & Environment, the application of good practices in large areas crossed by livestock could facilitate the sequestration of 300 million tons of CO2 each year on a global scale.

In any case selecting the best strategies on a case-by-case basis will require consideration of different aspects and context characteristics. “There is no one-size-fits-all when it comes to grazing in drylands,” Eldridge further explained. “Any effects of grazing, particularly overgrazing, will vary across the globe, making it important to consider local conditions and the type and number of livestock – and wild herbivores.”