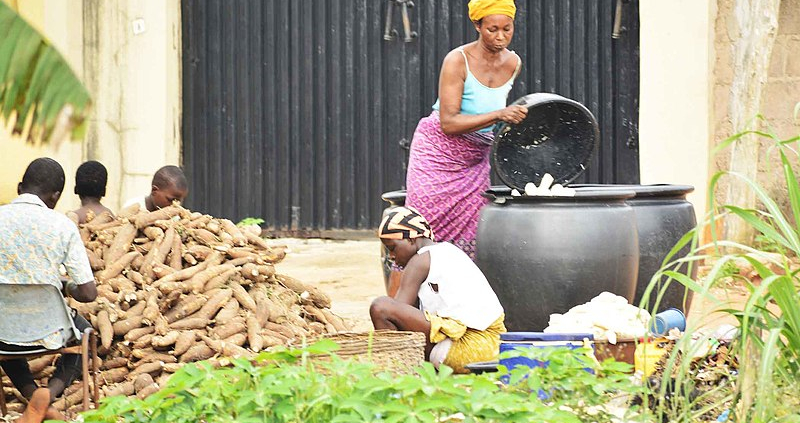 Actions to reduce soil acidity and increase phosphorus availability boost cassava crop yields, one of the basic food components for hundreds of millions of people

Liming practices, which consist in adding basic substances to the soil, can increase the yield of cassava crops without jeopardizing their quality says a Brazilian study which was recently published in the Agronomy Journal, a publication of the American Society of Agronomy. The data are extremely important because of their implications in terms of food safety. Widespread in tropical and subtropical areas of Asia, Africa and America, in fact, cassava is a basic component of the diet in emerging and developing countries.

The study focused on the effects of soil treatment. The practices under consideration, which involve the addition of base substances such as calcium carbonate, are designed to reduce soil acidity. Thus creating better conditions for crops and promoting the availability of phosphorus, an essential element for plant development that, not surprisingly, is typically included in fertilizers, including organic compost-based ones.

These operations, however, can create side effects impacting on the properties of roots that, with their high content of vitamins and minerals, are usually consumed by hundreds of millions of people.

The original assumption was that liming practices could increase cooking time. One of the properties that help define product quality. However, said Adalton Fernandes, a scientist at the Center of Tropical Roots and Starches (CERAT) of São Paulo State University, in a statement released by the Crop Science Society of America, the study “showed that liming caused minimal changes to cassava cooking times.”

FAO: we must invest in sustainable agriculture (Or we won’t be able to feed the world)

The study was carried at a farm located in Botucatu, about 140 miles from São Paulo, and required a two-year trial. Researchers, in particular, treated cassava crops with variable doses of base substances and phosphorus fertilizers to assess the effects on crop yield and boiling time.

Cooking time is crucial. According to a research published in August 2020 in the International Journal of Food And Science + Technology, “Cassava cultivars that farmers and consumers select for boiling share specific cooking quality criteria, among which softness, mealiness (or friability, i.e. the ability to disintegrate between fingers and in the mouth) and short boiling time are most important.” The results of the latest study, in this sense, are quite promising.

Yields can increase by 28%

Liming practices, researchers say, resulted in a not-so-significant increase in cooking time, which rose 6.5%. and took just a minute and a half longer. Soil productivity, on the other hand, increased significantly. Scientists, in particular, have observed an increase in the number of roots per plant (+8%). But also a strong growth in yields: +22% with the application of phosphorus, +28% with the use of liming strategies.

More experiments, Fernandes said, will be carried on with different cassava varieties in order to estimate the optimal amount of input for each kind of plant. Which are likely to respond differently to the substances.