Basel University: land erosion is responsible for more than 50% of phosphorus losses in agriculture. Africa, Latin America and Eastern Europe are at the epicenter of the crisis. And the future is still uncertain

Agriculture is at risk of steadily losing an essential element such as phosphorus due to increasing soil erosion according to a study promoted by the University of Basel. The study, which involved an international research team and was recently published in the Nature Communications magazine, has managed to quantify the mechanism for the first time thus showing its connection with soil health.

Unhealthy soil is number one responsible for phosphorus loss

By comparing global data on phosphorus content in soils with data on erosion rates, the researchers found that more than 50 percent of the global loss of this element in agriculture can be attributed to soil degradation. “That erosion plays a role was already known. The extent of that role has never before been quantified with this level of spatial resolution,” said research coordinator Christine Alewell.

The process is quite simple. “Erosion flushes mineral bound phosphorus out of agricultural soils into wetlands and water bodies, where the excess of nutrients (called eutrophication) harms the aquatic plant and animal communities.” That’s why “the elevated phosphorus content in waters mirrors the calculated loss of phosphorus in the soil in the respective region.” 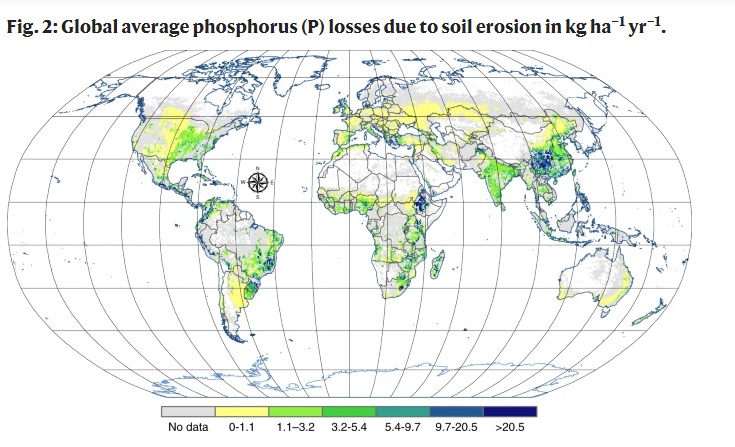 Africa and Latin America are at greater risk

Phosphorus depletion differs by regions. The limited use of chemical fertilizers – not to mention some well-known controversies, penalizes Africa because of their high cost. Latin America is affected by inefficient management of organic phosphorus while Eastern Europe experiences both problems. The catch, researchers say, is that the substance, which is essential for global food production, is not unlimited and is tied to geological reserves. “How soon these reserves might be exhausted is the subject of scholarly debate. Just as controversial is the question which states own the remaining reserves and the political dependencies this creates.”

Some countries may develop different solutions using organic fertilizers, for example. Other nations, however, seem to have limited options. “It’s paradoxical, especially as Africa possesses the largest geological phosphorus deposits,” says Alewell. “But the mined phosphorus is exported and costs many times more for most farmers in African countries than, for example, European farmers.”

The future is unwritten

It’s hard to imagine when the phosphorus will run out for agriculture. China, Russia and the U.S., “are increasingly expanding their influence” in Western Sahara and Morocco, where the newly discovered deposits are located. In the future, “they might also control this important resource for global future food production”. Europe is totally dependent on imports. But one thing is clear, authors say. “A drastic reduction in soil erosion is a major and important step in the right direction. Land managers can reduce erosion by ensuring ground cover for as long as possible; for example, through mulching, green manure and intercropping, and through topography-adapted cultivation – tilling fields transversely to the slope or terracing.”