In the South American country, a disputed 2020 law paved the way for the acquisition of non-demarcated indigenous lands. Despite legal battles more than two-thirds of Brazilan states are still enforcing the legislation

Since April 2020, Brazil’s native peoples have lost more than 250,000 hectares of land under the pressure of acquisitions by private companies according to a report quoted by the U.S.-based NGO Mongabay. The investigation focuses on a regulatory reform supported by President Jair Bolsonaro: the so-called Normative Instruction Number 9 for the “regulation of the requests, analysis and issuance of the Declaration of Recognition of Boundaries in relation to private property.”

In the past, says Mongabay, applications for land registration of new properties located in indigenous territories were automatically rejected. The new legislation, passed on April 16 two years ago, now allows large landowners “to obtain federal property certificates for areas in any Indigenous territory that has not been officially recognized, or demarcated.”

An assist to private investors and the illegal market in Brazil

According to the study, carried out by GeoPrecisa, a consulting firm specializing in land tenure certification and registration systems management, the acquisition of areas made possible by the new rule has affected 49 indigenous communities in Brazil. According to Mongabay, the law, introduced to eliminate the automatic block of applications for those lands not yet demarcated, paved the way for a large acquisition business.

This allowed “farmers, illegal miners and land grabbers to invade Indigenous lands and register the properties to themselves, including in areas whose use is restricted by Funai (Fundação Nacional do Índio, the Brazilian governmental protection agency for native people’s interests and culture, ed.) in order to locate and protect uncontacted Indigenous peoples.”

In contrast to the government’s support, Brazil’s Federal Prosecutor’s Office challenged the law, accusing it of favoring land occupation and violating indigenous rights. Although prosecutors have filed as many as 25 lawsuits against the rule, the new regulation has been suspended in just eight states. Less than a third of the total.

Among the main victims of the practice is the Porquinhos area in the state of Maranhão. Since the approval of Regulatory Instruction 9, Mongabay writes, the pace of purchases has increased. In two years, the government has certified and registered farm acquisitions on more than 69 thousand hectares. The indigenous territories of Kanela/Memortumré, (with 53 thousand hectares of land registered) and Bacurizinho (23 thousand hectares) were also particularly affected.

Maranhão, Mongabay says, is one of the epicenters of soybean sector development. Here investors, corporations and agribusiness firms are especially active in land purchases, the NGO explains.

Also problematic is the situation in the state of Mato Grosso do Sul where the federal government has approved the registration of more than 58 thousand hectares by farms operating in indigenous community areas. The Guarani Kaiowá community, in particular, has already lost 12 thousand of the 56 thousand hectares of its reserve.

Land grabbing is a global threat

Events in Brazil once again highlight the burden of land grabbing, the aggressive acquisition of land by private individuals. According to the latest report “I padroni della Terra” (The Masters of the Earth), published in 2022 by Italian NGO Focsiv, the phenomenon is still favored by digitization and widespread geopolitical crises. So much so that 91.7 million hectares of agricultural land have been grabbed on a global scale over the past 20 years for the benefit of large agribusiness multinationals and financial investors. 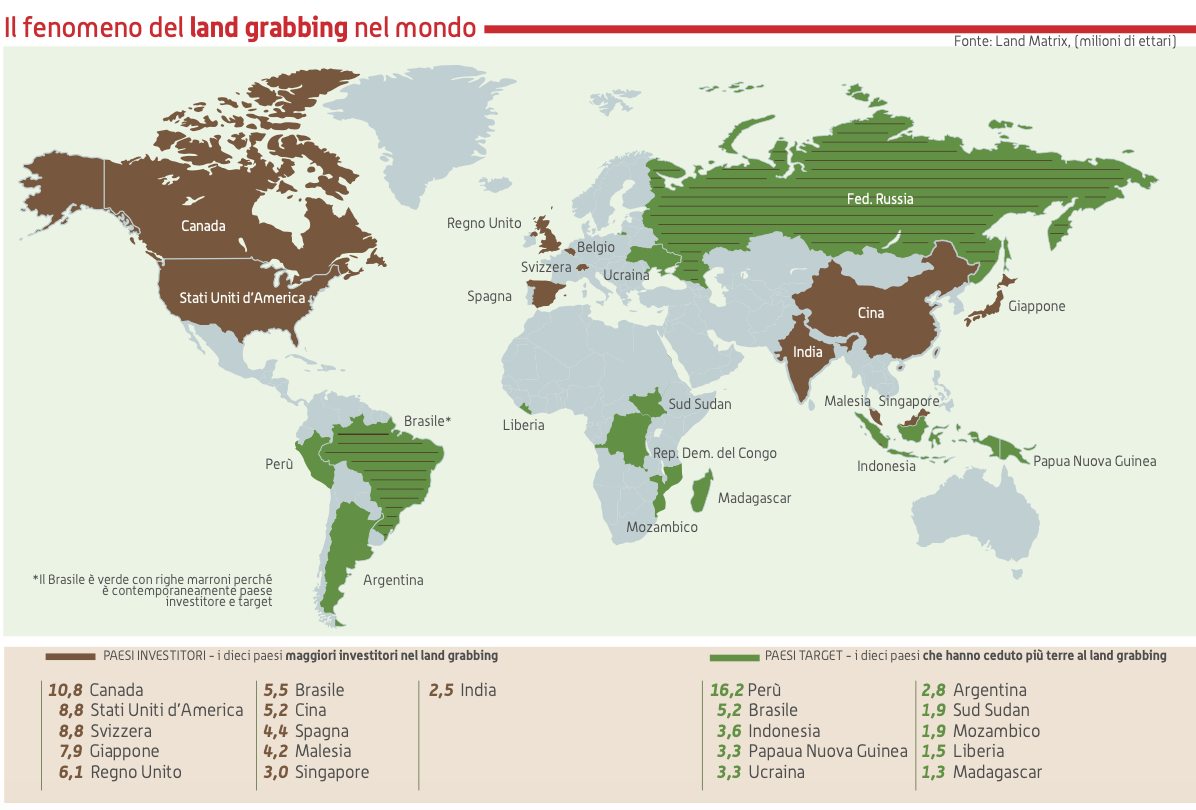 Analyzing numbers from the Land Matrix database, a site that collects information on contracts for the sale and lease of large tracts of land, researchers have shown a worrisome growth trend. Two years ago, in fact, territories hit by land grabbing amounted to 79 million hectares. The main victim of the acquisitions is Peru with 16 million hectares, followed by Brazil (5.2 million hectares), Indonesia, Papua New Guinea, Argentina, South Sudan, Mozambique, Liberia and Madagascar.