During rainy periods soil nitrogen in the soil is channeled into rivers, contributing to their contamination, a research from Nagoya University has found. The investigation thus denies the theory of atmospheric origin of water pollution

Nitrogen that contributes to pollution in waterways during rainy periods comes from the soil, not the sky according to a research by a team of scientists from Nagoya University in Japan. “Nitrate is an essential nutrient for plants and phytoplankton,” the authors explain. “But excessive nitrate levels in streams can damage water quality, cause eutrophication (the over-enrichment of water by nutrients), and pose health risks to animals and humans.”

However, what are the causes of this phenomenon? There are basically two hypotheses. The first involves nitrates in the soil that washes into streams; the second assumes that nitrogen compounds from the atmosphere dissolve with rain, precipitating into rivers and streams. The study by the Japanese team refutes exactly this second theory.

In order to investigate the causes of excessive nitrogen, the research team conducted a study to analyze changes in the isotopic composition of nitrates in water. They also analyzed the increase in nitrate concentrations during rainfall.

“Previous studies,” the scientists explain, “have reported that nitrate concentrations significantly increase during storms in the streams of the upper Kajikawa River in Niigata, northwestern Japan.”

To test this hypothesis, the researchers collected water samples from the catchment area, which includes the upper part of the river . Samples were taken at one-hour intervals for an entire day. The operation, conducted on three different occasions with the presence of heavy rainfall, provided undisputed results.

Moreover, “the concentration of nitrate in the stream was almost constant during the storm events, implying that the source of nitrate in stream water during storm events was the nitrate stored in groundwater”. In other word, “the number of storm events have little impact on the index of nitrogen saturation.”

The research then brought out another interesting detail. The scientists, in fact, found that the nitrogen-based compounds found in the riparian zone are produced by microorganisms living in the soil. “Microbe-derived nitrate is thought to be accumulated in soil in the riparian zone only in summer and autumn in Japan,” explained Professor Urumu Tsunogai, one of the researchers involved in the investigation. Understanding the seasonality of nitrate increase, he pointed out, could help ensure freshwater safety. 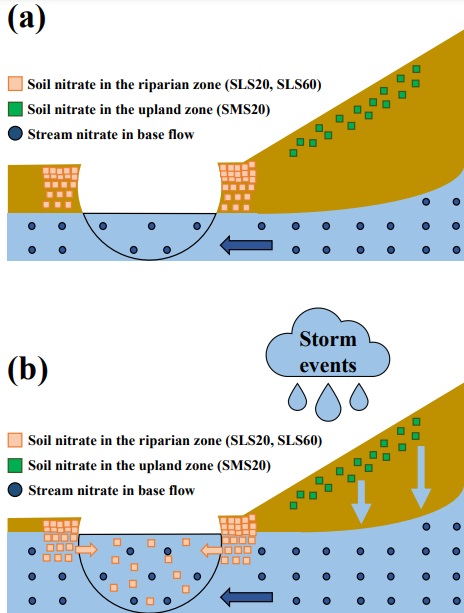 The elution of soil nitrate to the stream before the storm events (a) and during the storm events (b). Soil nitrate in the riparian zone and that in the upland zone are represented by the orange squares and green squares, respectively, while stream nitrate during base flow is represented by the blue circles. Source: Biogeosciences, 19, 3247–3261, 2022 © Ding et al. 2022. This work is distributed under the Creative Commons Attribution 4.0 License

Contrast to contamination obviously remains the most important goal. The research, in fact, highlights the central role played by nitrogen in the soil calling into question the issue of its depletion in cultivated areas.

Nitrogen remains an essential resource for agriculture. But at the same time, its excessive use causes its dispersion, thus generating contamination.

It is therefore not surprising that researchers have been stressing for some time the need to promote sustainable use of the element by balancing its costs and benefits. The numbers, after all, justify some concern. According to the Global Assessment of Soil Pollution report released last year by the FAO, in 2018 the Planet’s soils absorbed 109 million tons of synthetic nitrogen fertilizer.