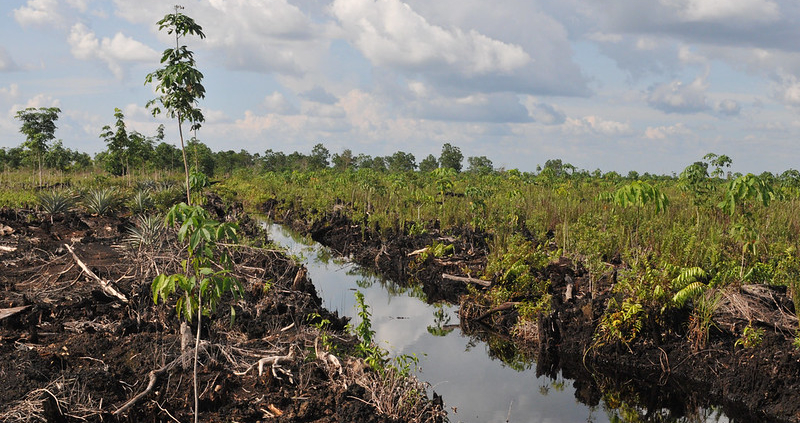 Enhanced weathering, used to facilitate the capture of atmospheric CO2 on the ground, has counterproductive effects when applied on peatlands in warmer areas, a German study has found. In these areas, in fact, carbon sequestration is offset by emission growth

Enhanced weathering is generally considered an effective way to absorb CO2 from the atmosphere by operating directly on the soil. But this strategy, a German research suggests, may not be suitable for all soils. This is particularly evident in the case of peatlands located in the Planet’s tropical belt. When subjected to this process, in fact, these environments end up generating the opposite effect, releasing more carbon than they can absorb.

Weathering is known to contribute to the erosion of rocks. After absorbing CO2 from the atmosphere thus assuming acid pH, rain typically reacts with the impacted material by breaking it down into tiny grains and forming sodium bicarbonate. In this way, carbon already removed thousands of feet above the ground is sequestered at ground level. Sometimes then it ends up in the oceans where it is stored in dissolved form or even trapped on the seafloor.

This process, which occurs naturally, has a fairly limited impact by absorbing an amount of carbon equal to just 0.3 percent of global emissions from fossil fuels.

The operation, moreover, proceeds very slowly. “This happens extremely slowly, and a reduction in atmospheric CO2 is only noticeable when we look at the trend over thousands of years,” notes Alexandra Klemme, coauthor of research carried out at the Institute of Environmental Physics at the University of Bremen in collaboration with the Leibniz Center for Tropical Marine Research of Bremen and Swinburne University in Kuching, Malaysia. The principle, in short, is not in question. But to increase its effectiveness, direct action is needed. And that is where the technique comes in.

An unsuitable method for tropical peatlands

Enhanced weathering consists of forcibly crushing rocks and spreading their dust on soils. Including agricultural ones. “This increases the surface area where the chemical reaction takes place, which accelerates the weathering process,” Klemme notes. This is precisely why, she adds, the dispersion of dust over the soil is considered “as a possible method for reducing atmospheric CO2.”

The problem, the study notes, however, is that the particular conditions of their environment make tropical peatlands unsuitable for this kind of treatment. Heat and humidity in fact encourage the erosion of these habitats, which are particularly prevalent in Southeast Asia. Agricultural conversion, moreover, has forced their drainage, “transforming peatlands from CO2 sinks into CO2 sources.”

By conducting a series of measurements in river flows draining peatlands in Indonesia and Malaysia within 10 years, researchers were able to assess the effect of weathering in terms of emissions. Increased acidity promoted soil destabilization thus increasing the release of CO2 from rivers and coastal areas.

“We estimate that the potential carbon uptake associated with enhanced weathering is reduced by 18–60% by land-based re-emission of CO2 and is potentially offset completely by emissions from coastal waters,” the research states.

The results also “suggest that in contrast to the desired impact, enhanced weathering may destabilize the natural carbon cycle in tropical peatlands that act as important carbon sinks and protect against coastal erosion.” The use of this technique, in short, generates more costs than benefits. And it threatens the resilience of habitats that are known to be strategic in counteracting climate change in many areas of the Planet.