Given the failure to prevent climate risk, the world economy could suffer damages up to 20% of GDP by the end of the century. While the reduction of biodiversity impacts on the economic system

The future of the economy depends on ecological transition. But be careful: in order to guarantee a future for the economy, we need to act now. And numbers are actually significant. “Acting early offers clear net benefits – also from a financial stability perspective,” said Christine Lagarde, president of the European Central Bank and the European Systemic Risk Board while mentioning the latest joint report by the two institutions. According to this investigation, “Failing to address climate-related risks could see a 20 per cent drop in global GDP by the end of the century”.

No doubt, therefore, on the need not to accelerate the initiatives on sustainable agriculture and soil protection. “Whatever the short-term costs of orderly transition may be”, Lagarde added, “they will pale in comparison to the costs of unfettered climate change in the medium to long term”.

Without tangible action to tackle climate change, the report says, the risk of losses for the most greenhouse gas-emitting companies “would become dominant in around 15 years.” Events such as fires (an issue that has long been on the EU’s agenda), heat waves and water crises, moreover, “could impact up to 30% of euro area bank corporate exposures.” In other words, financial operators would also be affected. This means that the continental economy as a whole would suffer the consequences of the disaster.

Losses, the report says, “are expected to grow to nearly €50 billion per year by the end of this century under a 3°C global warming scenario.” Effective climate mitigation policies, by contrast, would reduce damage “by more than 70 percent.” 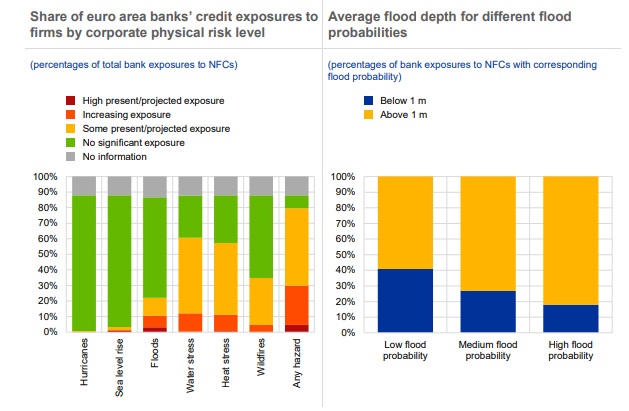 Banks and funds under scrutiny

The financial sector, the report says, cannot expect to solve the problem with the support of insurance companies. according to the survey, in fact, “only 35% of economically relevant climate losses on average are estimated to be currently insured in the EU.” While “exposures to high-emitting firms represent 14% of collective euro area banking sector balance sheets.” In short: “losses related to the highest emitting firms could constitute an estimated 10% of bank balance sheets in the event of credit rating downgrades associated with a rapidly rising carbon price to Paris-aligned levels.” 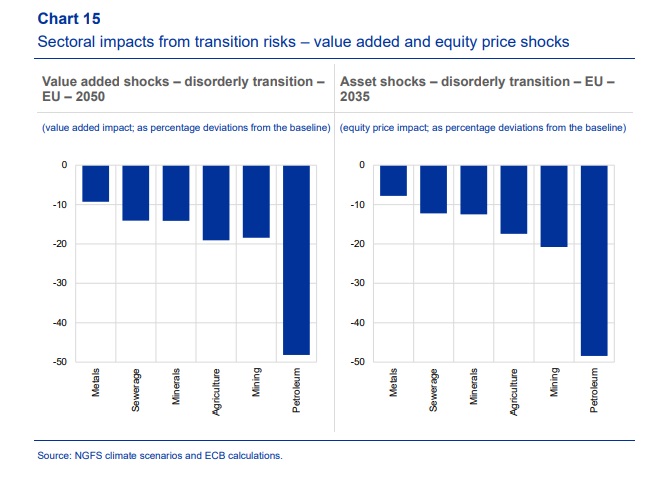 Sectors with the highest risk in terms of equity value reduction in a disorderly green transition scenario. © European Central Bank. All rights reserved. Reproduction for educational and non-commercial purposes is permitted.

The risks, of course, are also clear for investment funds, which are too exposed, in most cases, to climate-affected sectors of the economy. According to the authors, only 11% of EU funds today can be defined as truly green. Which means not exposed to the most environmentally critical sectors. For the remaining 89%, however, losses in the medium term could be significant. “Adverse scenarios,” the report says, “suggest a direct aggregate asset write-down of 1.2% in holdings of equity and corporate bonds in the next 15 years, which together make up over 60% of around €8 trillion in investment fund assets.”

Climate and biodiversity are “twin crises”

For the global economy, however, the climate factor is not the only environmental risk to be faced. In fact, the damage linked to variety reduction in ecosystems also weighs heavily. It is no coincidence that some researchers have begun to see climate change and the loss of biodiversity as “the twin crises facing the global financial system.” A recent survey commissioned by the British government and known as The Dasgupta review, in particular, underlined how “our economic system is dependent on biodiversity.”

For some time, the survey noted, “G7 climate and environment ministers acknowledged with grave concern that the unprecedented and interdependent crises of climate change and biodiversity loss pose an existential threat to nature, people, prosperity and security.” Protection policies and sustainable investment strategies are the key to avoid environmental damages and financial losses.