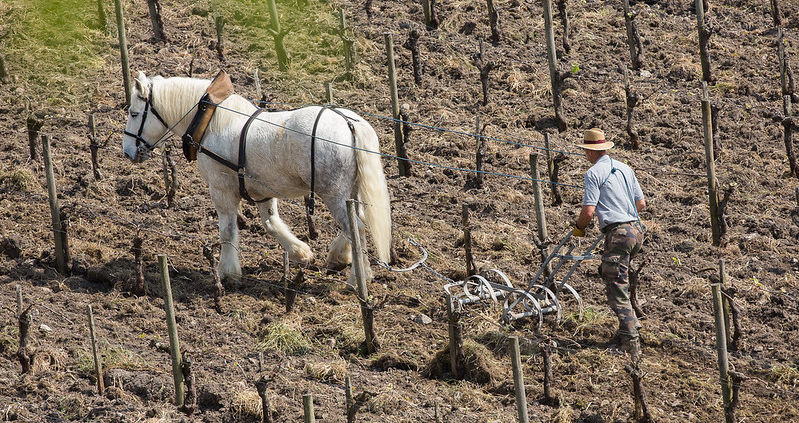 Three hundred French winegrowers rely on animal traction to till the soil. An unusual choice which generates benefits for soil health and more

Draught horses perform better than mechanical tractors according to hundreds of French winegrowers leadinthet are currently leading a sort of new wave in the almost entirely mechanized agricultural sector. Nope, this is not a marketing strategy nor a nostalgic exercise. The truth, says British newspaper The Guardian, is that the benefits for soil health are real. And they are attracting growing attention.

In French vineyards owners are betting on horses

The mechanization of agriculture is an ancient trend. In Italy, for instance, tractors increased from less than 50,000 to almost 340,000 between the end of WW2 and the early 1960s. The use of animal traction, in other words, did seem to disappear. However, in recent years, an unpredictable revival has taken place. Last year, the Institut Français du Cheval et de l’Équitation surveyed 299 winegrowers in the country using horses for soil tillage operations.

Soil is the winner

“Draught horse professionals, in viticulture in particular, were economically successful and witnessed a demand greater than the supply due to a lack of service providers,” Clémence Bénézet, co-author of the survey, told the Guardian. The study also highlighted the main factors behind farmers’ choice. And the response was clear.

“Soil ecology is the main motivation of winegrowers using horse traction,” the research says. “Horse traction also allows for the preservation of older vines and the rehabilitation of abandoned plots once deemed too difficult to cultivate.”

The problem is that mechanical tractors carry some downsides. ““One of the biggest strains is the compaction effect,” says the Société Française des Équidés de Travail, an association sponsored by the Ministry of Agriculture. “The more the soil is ventilated, the more vulnerable to compaction it is.” A too compact soil blocks the action of invertebrates, which are crucial players in the soil ecosystem. “The same thing goes for the mineral elements which find it hard to reach the plant, leading to the asphyxiation of the root system”. Finally, “the loose earth which is on top of the plough pan suffers from erosion.”

In contrast, experts say, “Working with horses thus avoids putting in place these plough pans. And if it is indeed true that the pressure upon the soil exerted by a moving horse is greater (per square centimetre) than that of a tractor, its bearing surface is almost zero. What is more, the work tool is behind the horse which will reverse any compaction caused by its passing.”

Greater sustainability and other benefits

It’s hard to imagine a mainstream use of equine traction. But even on small-scale the practice looks exciting and it carries many social and environmental implications. Lowering the pace of operations, for example, seems to have a positive impact on the quality of work. For organic farms, moreover, the use of animals in the tillage process is also associated with the removal of pesticides and a lower environmental impact due to the lack of mechanical equipment powered by fossil fuels.

Finally, even soil seems to be more reactive. “In vineyards that have only ever been worked using animal traction”, says the Société Française “the first harvest can take place two years earlier, thus improving the profitability of those plots.”