The growing food insecurity and the increase of obesity show the importance of a proper diet. If we want to provide universal access to it, according to FAO, we need to change our production system

A healthy diet requires sustainable agriculture. Especially in a growing food insecurity scenario. That’s the message sent by FAO in its latest regional report for Central Asia and Europe. “Although severe hunger has not been a major issue in Europe and Central Asia in the past 20 years, the region is in part facing an increase of moderate food insecurity – understood as irregular access to nutritious and sufficient food -, while also dealing with the widespread rapid growth of obesity,” the study says.

“The past 12 months have shown that our health and the functioning of our agrifood systems are fundamental – and that more effort is needed,” said Vladimir Rakhmanin, FAO Assistant Director-General and Regional Representative. The FAO therefore calls for supporting, also financially, farmers who “have been particularly affected by the disruptions caused by the COVID-19 pandemic”. It also invites to pursue that new agricultural model that FAO has long supported.

A link between diet and agriculture

The general idea, FAO explains, is that any diet design must take into account environmental and climate impacts and production processes. The European Union’s Farm to Fork strategy, which aims to make agriculture and livestock farming healthier, more sustainable and eco-friendly, is part of this approach. And, as data suggests, it looks more urgent than ever. In Europe, as well as in Central Asia, on the other hand, “the availability of animal-based foods is above the world average, while the consumption of vegetables, pulses and fish is below the world average” according to the report. “The main conclusion – says Cheng Fang, FAO economist and main author of the report – is that despite good progress in diversifying and moving food availability in the right direction, there is a need to reorient food production and trade systems to enable healthy diets.”

The strong incidence of excess weight in many young people suggests the urgency of policies to promote a healthy diet. Overweight or even obesity cases are increasingly widespread with a peak in the Mediterranean area. In Italy, Spain, Greece and Cyprus, for example, the proportion of male children aged between 6 and 9 years who are at least overweight exceeds 40%.

This figure, released by the World Health Organization and reported by FAO, highlights a problem that obviously also affects other age groups, with serious consequences for health. “The overconsumption of foods high in salt, fat and sugar and the underconsumption of fruits and vegetables calls for structural changes in food production and consumption within current food systems,” the report says. “WHO data show that unhealthy diets account for an estimated 86 percent of deaths and 77 percent of the disease burden in the region.” 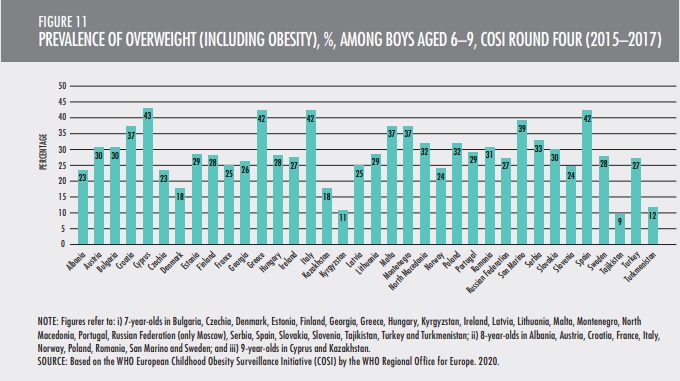 While one part of the world consumes too much (and badly), by contrast, another is eating poorly. And the trend, unfortunately, is on the rise. “Conflict, economic shocks – including due to COVID-19, extreme weather – pushed at least 155 million people into acute food insecurity in 2020,” FAO said recently.

In the 55 countries and territories covered by the report, “over 75 million children under five were stunted (too short) and over 15 million wasted (too thin) in 2020.” Africa was the epicenter of the problem with almost 98 million cases among its population. The list of countries affected at global level includes Yemen, Afghanistan, Syria and Haiti. Although with variable intensity, in any case, no area of the Planet, not even Europe, has been completely exempt from the problem. 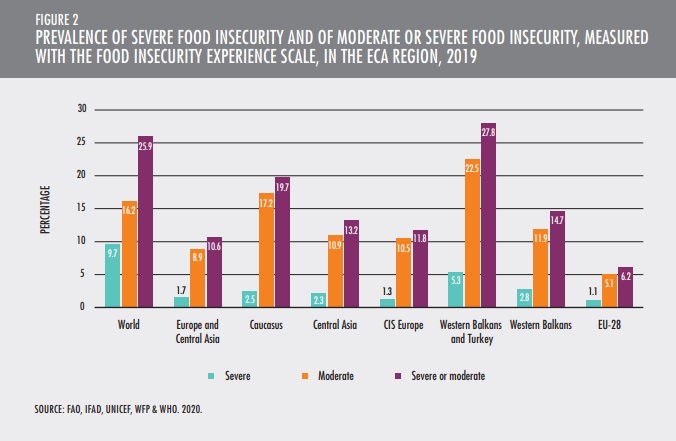 The healthy diet? It might be cheaper than expected

A healthy diet, FAO says, is often expensive. On average, according to the report, eating properly costs five times as much as the basic food intake intended to cover only the energy needs of individuals. But the comparison should also take into account the environmental and social costs of the current production system. And this is where numbers tell a different story.

“Overall, the total costs associated with healthy diets are much lower than the costs of current consumption patterns” the report warns. “If the population were to adopt healthy diets, direct and indirect health costs are projected to be reduced by as much as 97% while the social cost of greenhouse gas emissions would contract by between 41% and 74%.” These benefits, FAO says, “could potentially increase over time with innovation and adoption of new technologies for climate-efficient agriculture.”