Pixabay License Free for commercial use No attribution required

New FAO report on global land pollution unveiled. The size of the problem is known, the lack of data weighs. Now is certainly time to act

Pollution is here but you can’t see it. Especially the soil one which impacts on everybody’s lives putting at risk the sustainable development goals of the Planet. That’ s the key message expressed by the FAO during the launch of its new report last Friday. “Soil contamination affects the quality of agriculture generating a loss of productivity between 15% and 20″ explains Natalia Rodríguez Eugenio, earth scientist and member of the Global Soil Partnership Secretariat (GSP). A clear damage “that affects especially the most vulnerable individuals”, she adds, given that 4/5 of the people classified as poor in the world still live in rural areas and largely depend on soil for their economy and livelihoods.

We must be cautious, however, because data are most likely underestimated. Little is known about the real size of the process. But one thing is clear: the domino effect is encouraging the uncontrolled spread of the problem. Soil, for instance, “is one of the main recipients of contaminants” including nitrogen fertilizers, according to FAO. And soil pollution “can have irreparable consequences on human and ecosystem health.” Water, air, food and people. In short, no one is safe. “Ecosystem and human health are interconnected,” the report says. “Yet neither can be effectively addressed without tackling soil pollution.” 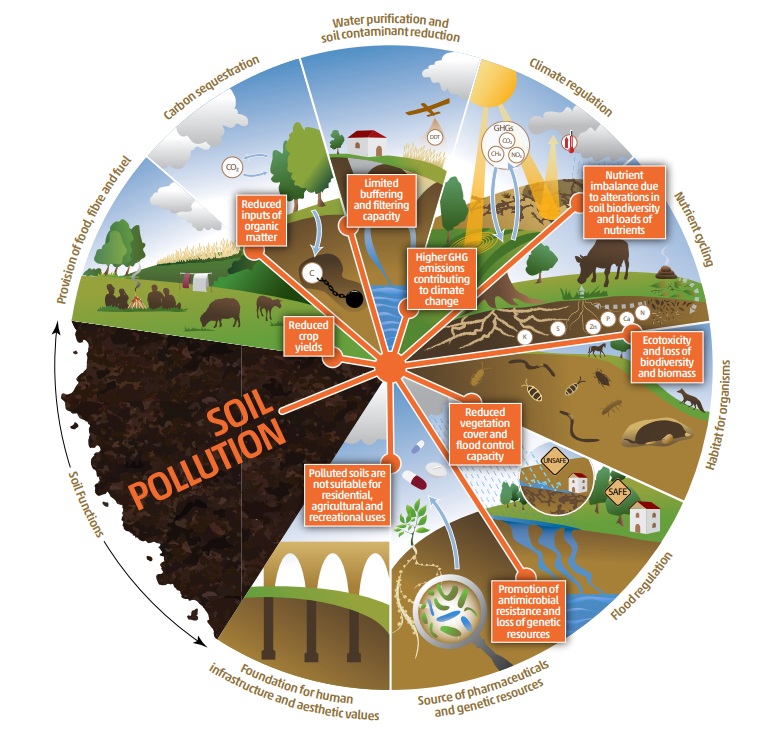 Plastics and pesticides under scrutiny

The main sources of soil pollution “are industrial activities, mining, waste treatment, agriculture, fossil fuels extraction and processing, and transport emissions. There is, however, no concrete and comparable data on the actual emissions of each sector”. The truth, however, is that “since the beginning of the XXI century, the global annual production of industrial chemicals has doubled to approximately 2.3 billion tonnes and is projected to increase by 85 percent by 2030″ according to FAO.

Today, most part of the data come from the agricultural sector where the impact of contaminants is widely known. The greatest concerns are pesticides but also “the proliferation of organic contaminants and emerging contaminants such as pharmaceuticals, antimicrobials that result in resistant bacteria, industrial chemicals, and plastic residues.” The current pandemic, FAO says, has put pressure on the environment “with an intensified release of waste.”

Europe is at risk

The analysis focuses as much on sectors as on geographical areas. The survey on European agriculture is especially interesting, covering 194,000 hectares of soil, or 25% of the continent’s land. “Agriculture represents a significant source of diffuse pollution in the region, mainly due to the use of agrochemicals,” the report says. “The analysis of agricultural soils sampled under the EU LUCAS survey showed that 80 percent of agricultural soils contain pesticide residues.” These include glyphosate and its derivatives, DDT and fungicides.

Nitrogen, whose presence reaches critical values in the runoff to surface waters in 65-75% of agricultural land in the EU. Three quarters of European soils, in other words, risk eutrophication. Also worrisome is the occurrence of elements such as arsenic, cadmium, copper, chromium, mercury, nickel, lead and zinc. “About 21 percent of agricultural soils in Europe present levels of cadmium above the regulatory thresholds” according to the report.

Although global distribution patterns are hard to define, the identification and assessment of pollution risk at potentially affected sites is a basic first step. Remediation operations are crucial and require shared expertise at the regional level. But prevention is still the best strategy. “In the current scenario of a worsening global trend in soil pollution,” the report says, “greater political, business, and social commitment is needed to seek alternative solutions to the use of highly toxic contaminants and increased investment in research, prevention and remediation.” Enhanced cooperation and partnership, in particular, “are essential to ensure the availability of knowledge, the sharing of successful experiences, and universal access to clean and sustainable technologies, leaving no one behind.”