Great Green Wall of the Sahara and the Sahel Initiative

A cost-benefit analysis of the Green Great Wall project in the Sahel has been published in Nature Sustainability. Every dollar invested produces an average return of $ 1.2, peaking as high as $ 4.4. Despite the harsh climatic conditions

It has been – more than rightly – welcomed for its ambitious environmental and climate objectives: to put a barrier against desertification, to combat the degradation of ecosystems and biodiversity, to protect food security, to guarantee water for future generations, to fight global warming. But behind that green belt 7600 kilometers long and 15 wide there is also a project of great economic value for investors. The cost-benefit calculation of the Great Green Wall (GGW) is the focus of a study conducted by FAO and published in Nature Sustainability.

For every US dollar committed to the massive land and livability effort, from Senegal in the west to Djibouti in the east, investors can expect an average return of $ 1.2, with results ranging between $ 1.1 USD and $ 4.4 USD. The analysis used both field data and satellite information to track land degradation over the period 2001-2018. He then compared the costs and benefits of soil restoration based on different scenarios adapted to local contexts.

The results provide that economic transparency which, combined with the political will shown by the African countries involved and the technical know-how provided by international organizations, should encourage the private sector to invest in the project. And indeed interest is growing. “The Great Green Wall initiative should help change the narrative made about the Sahel region,” said Moctar Sacande, coordinator of international projects at FAO’s Forestry Division and one of the study’s lead authors. “Our analyzes show that investors can indeed get a respectable return on their investment in efforts to restore the land.” 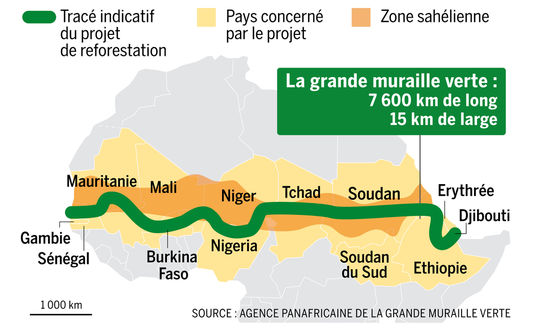 The route of the African Great Green Wall.

Greening and land restoration along this strip of sub-Saharan Africa is already underway. Communities are planting native and hardy tree species. Such as Acacia Senegal, which provides gum arabic widely used as an emulsifier in food and drinks. Or like Faidherbia albida (better known as Gao), which helps fertilize the soil for growing staple foods such as millet and animal fodder. Already, more than 500 communities have seen increased food security and income-generating opportunities.

However, the total area currently affected by the Great Green Wall remains limited: in recent months the UN agency underlined that, at the moment, only 4% of the intervention area specifically delimited under the Great Green Wall has been restored, equal to 4 million hectares out of the planned 100 million. Numbers that rise to 18 million hectares if we also consider the soils restored in other locations in the countries involved. 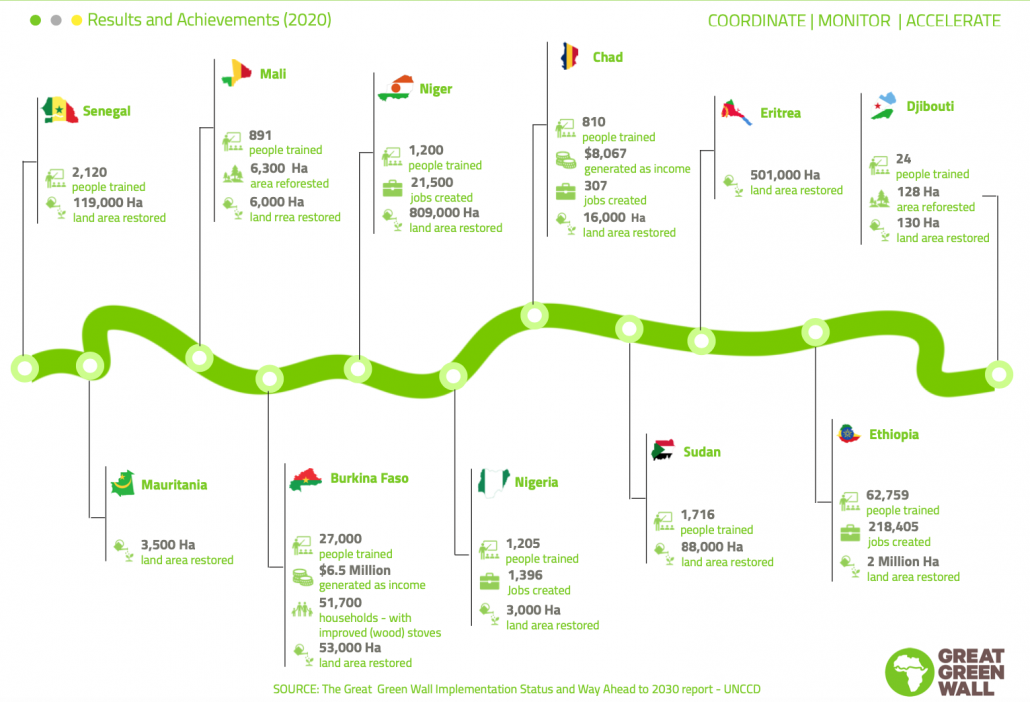 In particular, the armed conflicts which pervade the region and which have long made the programme’s development potential uncertain are weighing on it. The study published in Nature Sustainability notes that around 50 percent of the affected area is currently inaccessible for safety reasons. “And yet, despite this, the interventions to restore the territory still represent a valid commercial proposal”, the authors of the analysis say.

To achieve the goal set by 2030, it would be necessary to regenerate around 8 million hectares a year, over the next 10 years. In economic terms, the effort required – Fao analysts calculate – is about 4.3 billion dollars every year by the end of the decade. At present, $ 20 billion has been committed to the construction of the Great Green Wall. The sum also includes the 14.3 billion announced a year ago by French President Emmanuel Macron during the One Planet Biodiversity Summit organized by France, the UN and the World Bank. Jeff Bezos then took care of donating another billion. Amazon’s number 1 announced it at the COP26 climate conference held in Glasgow last November, as part of his Africa Fund.

A strategic project on several fronts

With its potential for carbon sequestration and biodiversity restoration and its emphasis on socioeconomic benefits for impoverished communities inhabiting the region, the Great Green Wall straddles key areas of climate mitigation, adaptation and of resilience.

Support for the implementation of the Green Wall is a key part of the work of FAO’s Action Against Desertification, active in 10 countries of the Sahel Wall and includes the creation of baselines and monitoring of GGW in North Africa, Sahel and equatorial Africa. The program seeks to help restore degraded land on a large scale and sustainably manage fragile ecosystems. It also puts rural communities at the center of restoration and enhancement to meet the enormous environmental and socio-economic needs.

The program works to strengthen local capacities and put in place monitoring and evaluation systems that monitor progress and impact, sharing information and promoting South-South cooperation to leverage lessons learned.