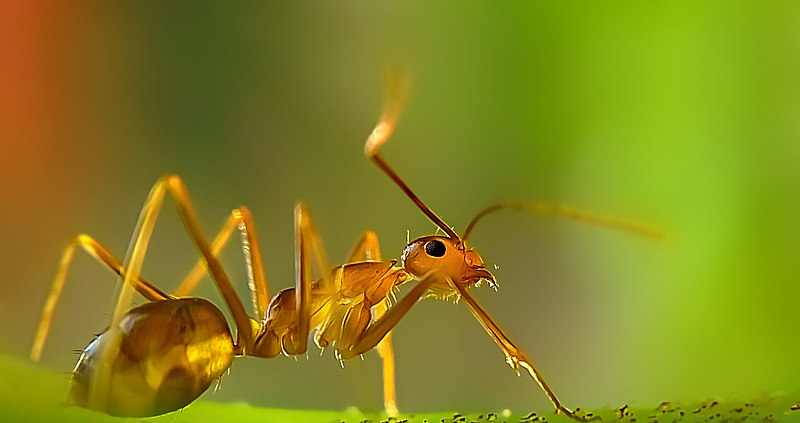 Ants may be a natural alternative to pesticides in tackling plant pests, says a research published in Proceedings B, the British Royal Society’s academic journal of biological sciences. The investigation, which was carried out by a group of scientists from different universities and research centers (Uberlândia, São Paulo and Belém in Brazil; Moncada in Spain; and Ann Arbor, Michigan, United States) examined 17 crops in different areas of the world.

Researchers, The Guardian explains, “looked at 26 species, most of them tree ants, which nest on plants or the ground but often climb plants.” The results highlight how “do best in diversified farming systems such as agroforestry (where trees and crops are grown on the same land) and shade-grown crops because there are more nesting sites and food resources for them.”

The scholars analyzed 52 previous research studies comparing data on plant groups characterized by the presence of ants and those without them. “We built four multilevel meta-analytic models, one for each of the following variables: pest and natural enemy abundance, plant damage and crop yield,” the authors write.

Then they developed different models that took into account aspects such as size of ants and the observed field, type, specialization and spread of pests, cropping system and duration of the experiment.

In this way the scientists were able to analyze “how these factors separately can modulate the effect size of ants on the main variables of biological control”. Results indicate “that disservices such as the increased abundance of honeydew-producing pests and decreased abundance of natural enemies are outweighed by biological control ecosystem services provided by ants.” 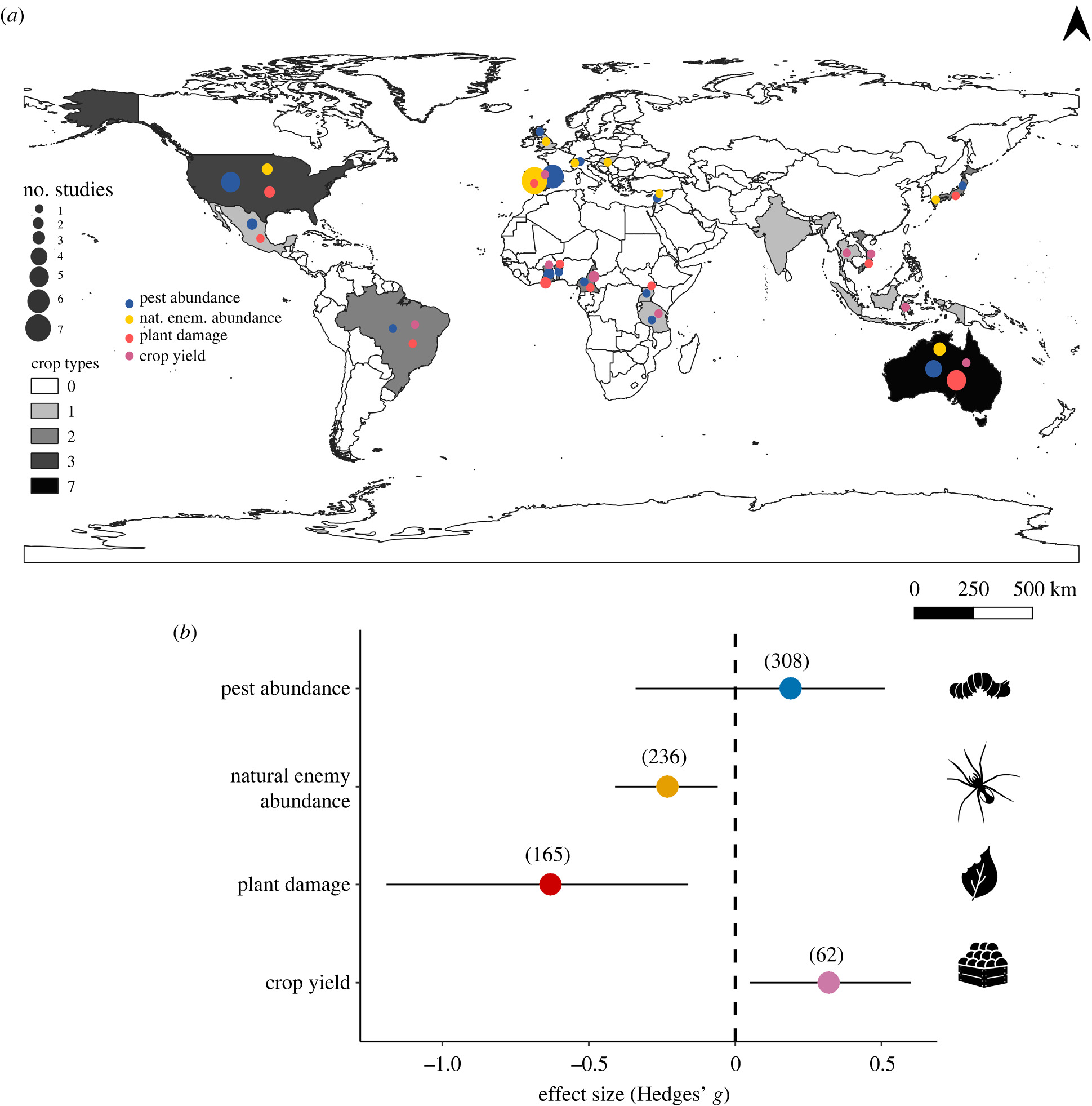 Overall distribution of the number of ant impact studies analyzed by researchers (a). Overall effect of ants on pest and natural enemy abundance, plant damage and crop yield (b). Image: Royal Society, Anjos et al. “The effects of ants on pest control: a meta-analysis,” August 2022 Attribution 4.0 International (CC BY 4.0)

Overall, the study says, the presence of ants, regardless of their body size, ensured fundamental services for crops such as decreasing the presence of pests and plant damage by leading to increased crop yields. Pests that produce honeydew make exception. Honeydew is a sugary substance that the ants themselves feed on. That’s the reason why ants preserve pests which are responsible of its production.

A crucial factor in pest control, the researchers further note, is crop biodiversity. “Crop systems that allow greater plant diversity in the environment (e.g. shaded crops) favour the role of ants in the control of non-honeydew-producing pests,” says the study. In these systems, moreover, “there may be a dilution of pest resources, allowing better biological control by ants. Compared to monoculture, ants decreased the abundance of these pests by 104% in shaded crops.”

Ants, the Guardian notes, represent the largest family among the insect class, accounting for about half of its entire biomass. With their 14,000 species on the Planet-many of which are still unknown-these creatures are already being used in agricultural processes. “Citrus growers in China have used ants in farming for centuries,” the British newspaper further notes.

In addition, “the insects have also been used to help control forest pests in Canada, cocoa pests in Ghana and crop pests in Nigeria.” In Fiji, finally, ants “can cultivate and grow at least six species of plant, as part of a mutually beneficial relationship that dates back 3 million years.”

Flour-based pesticides hit the market as scientists are concerned

An alternative to pesticides

According to Diego Anjos, one of the scientists involved in the research, the available data “encourages farmers to use more sustainable practices such as biological control provided by ants and practices of shaded crops as a way to naturally promote ants in crop systems.” Also quoted by The Guardian, Patrick Milligan, a researcher at the University of Nevada, who was not involved in the research, described the results as “both heartening and not at all surprising.” The use of these insects, he said, represents another option for enabling agriculture to move away from pesticides.

The idea seems fascinating, especially considering the effects of chemistry in agriculture. In recent months, a report by Pesticide Action Network (PAN), a federation of hundreds of NGOs in 60 countries, showed a 53 percent increase in cases of contamination in fruit and vegetable specimens in Europe between 2011 and 2019.

During the period, for example, the share of kiwifruit with traces of pesticides in the Continent rose from 4 percent to 32 percent. The share of contaminated cherries went from 22% to 50%. Moreover, in 2019, contamination was detected on 87 percent of pears produced in Belgium, 74 percent of cherries grown in Spain, and 85 percent of celery from Italy.